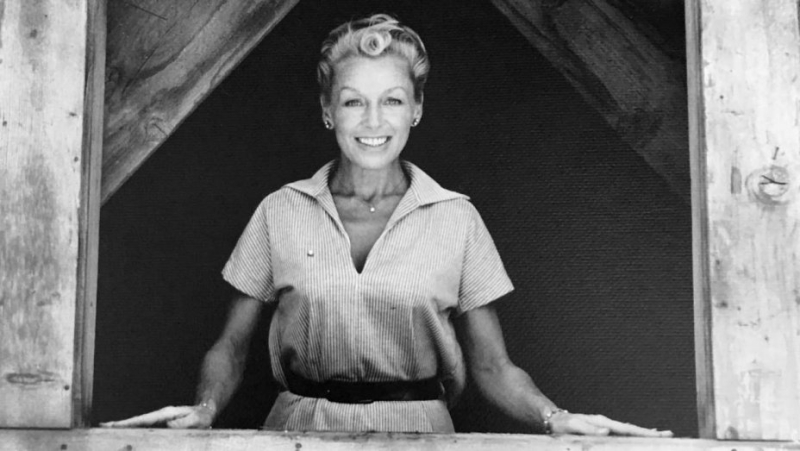 Gibson in her coaching years (Image via Schuyler Prail)

Julie Gibson, an American singer and actress best-known as a dish in a pair of Three Stooges films, died October 2 in her sleep.

At 106, she had been one of the world's oldest living entertainers of any kind.

Born September 9, 1913, in Idaho, she was active in community and local theater, eventually going pro and touring parts of the U.S. with Camille Sorey and Her Girlfriends.

A soloist with Bob Young's orchestra as early as 1935, she expanded her fame by singing for Jimmie Grier's orchestra in 1937. She sang at the 1938 Oscars and toured with Edgar Bergen.

By 1941, Gibson was making small film appearances, and was featured with a credit in 1944's Lucky Cowboy, a short.

She showed up in serials, mostly, including Chick Carter, Detective (1946), and more prominently in the Three Stooges flicks Three Smart Saps (1942) and Sock-a-Bye Baby (1942).

Otherwise, her roles were mostly bit parts, but in such classics as Going My Way (1944) and The Clock (1945). She sang the title song for 1944's Hail the Conquering Hero.

According to her family, when she opened an acting studio with Agnes Moorehead, she tutored Maya Angelou and future Oscar winner Sidney Poitier. She also worked as a dialogue coach, notably on Family Affair (1969-1971).

Gibson was preceded in death by her husband Charles Barton in 1981. She is surved by her cousin and her niece.