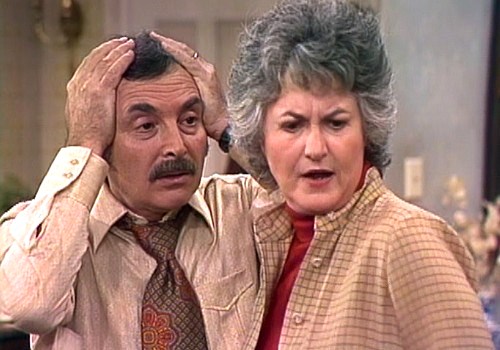 My obit for ExtraTV: Bill Macy, the actor remembered for his portrayal of flustered Walter Findlay on the Bea Arthur-led sitcom Maude (1972-1978), died Thursday in L.A., THR reports. He was 97.

Born May 18, 1922, in Massachusetts, he was raised in Brooklyn and drove a taxi while pursuing his acting ambitions. Macy found his first work on Broadway as Walter Matthau's understudy in 1958.

He made his TV debut, fittingly, as a cab driver on 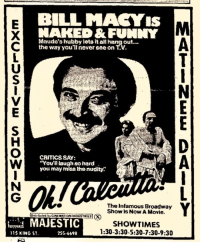 the soap opera Edge of Night in 1966, and enjoyed great success in the original cast of the avant-garde Oh! Calcutta! off-Broadway in 1969. He met his wife — actress Samantha Harper, who survives him and with whom he made numerous appearances on the game show Tattletales in the '70s — during the run of the show, which was remarkable for its bawdy focus on sexual humor and its featuring of female and male nudity.

Producer Norman Lear was said to have first seen Macy in an off-Broadway show, comically choking on a chicken bone. It was enough to secure him the part of Walter on Maude, a spin-off of Lear's powerhouse All in the Family. Focusing on a middle-aged liberal firebrand played by Arthur, the show tackled hot-button issues of the '70s, including feminism, political corruption, racism, gay rights, domestic violence, substance abuse, and abortion.

Macy a year ago on a local Beverly Hills talk show: