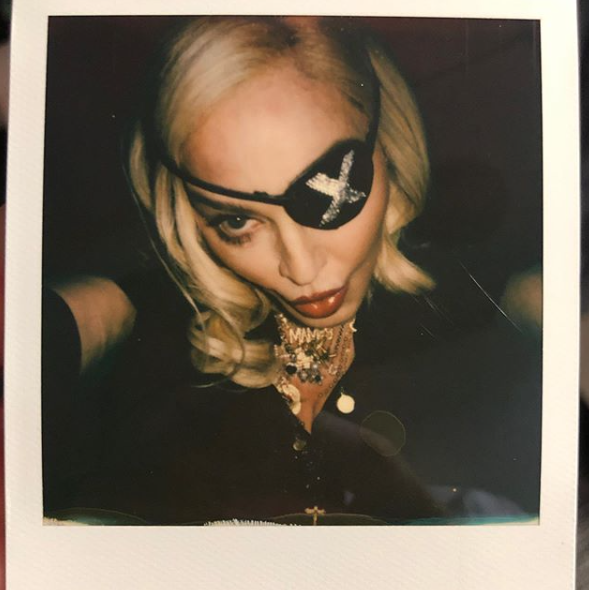 Madonna has two competitive audience participation aspects to her current Madame X tour — the beer bitch (she grabs a seat at the end of the front row and interviews a fan, sharing a beer) and the Polaroid selfie (she shoots a selfie with her “I Don't Search I Find” Polaroid then auctions it).

I got one, and various Madonna sites have documented many of the other winners. So far, there has only been one night when she refused all bids. That night, an obnoxious drunk fan was trying to use the bidding to get her attention to give her a hat me made (I don't want your hat, she snapped — my hero! Everyone around the guy was complaining about his awful behavior. Rejected, he broke into tears and left. Bye-bye, baby, bye-bye!).

Last night (a night on which one of Madonna's greatest music-video directors, Mary Lambert, was in da house), a new friend of mine — who was there when I won — snagged the selfie! He is the only person not in the front or second row to be successful. Here is Leo's report:

Above: From a previous night

Honestly, I wasn’t going to make an offer because I saw the security weren’t allowing anyone to go to the front. Then the guy next to me (he was talking and screaming all the time during the show) yelled, “$2,000!” but he didn’t have the money. He got security's attention, though, and they asked, “Do you really have it?”

Then I stepped in and I showed with my fingers: 2.

They let me go to the front while the other guy with the $1,500 was still trying to convince Madonna to accept his offer, “I love you,” etc. I tried to interrupt, but I wouldn’t dare. Security advised me to go and tell her I was offering $2,000, so I did and she goes, “Do you know that you’re interrupting?” I tried to explain myself, but then she asked, “How much do you offer?” I said, “$2,000,” then she accepted!

She asked me what do I do for a living and my name. I said I work for ashipping company and I informed her I’m from Greece — I guess she could have been wondering due to my accent — and she goes, “You’re from Greece and you have a job? I don’t know anyone who has a job in Greece!”

I replied, “You’re right,” but then she smiled back, meaning she was joking — she was sarcastic due to the Greek economic crisis.

Then she shook my hand and said, “Leo, thank you for your generosity.”

Another two grand in the pot for Raising Malawi.