DEADSTATE: Tulsi Gabbard parroted the conspiracy theories of a 9/11 truther who doesn't believe Assad's chemical weapons attacks in Syria ever happened. She's not a Democrat. She's a disgrace, and the others running for president should refuse to even be seen with her on the 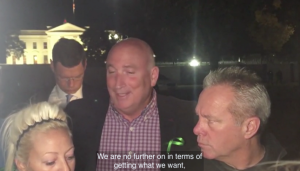 WAPO: Trump conned the Dunns, whose 19-year-old son was killed by Ann Sacoolas, wife of a U.S. diplomat, in the UK and left the country claiming diplomatic immunity. Trump tried to force the Dunns to meet Sacoolas ON THE SPOT, then lied, telling them he'd try to push for justice for them. Guys, he's never giving her up.

HUFF POST: Warren took heat at last night's Democratic debate — but I thought she weathered it well. Bernie looks spry, but Hillary was practically entombed by the media for having pneumonia, let alone a heart attack. He's done. Biden was Biden, and remains probably our best shot.

JOE.MY.GOD.: Another Giuliani associate has been arrested.

KENNETH IN THE (212): To sate your wrestler fetish.

GQ: The myriad ways in which Trump's disgusting offspring have profited, obscenely, from his time in office.

METROSOURCE: How one gay man's obsession with lip balm helped him feel free — until it didn't.

ONLYFANS: Seems @estebancoach has a thing for thongs.