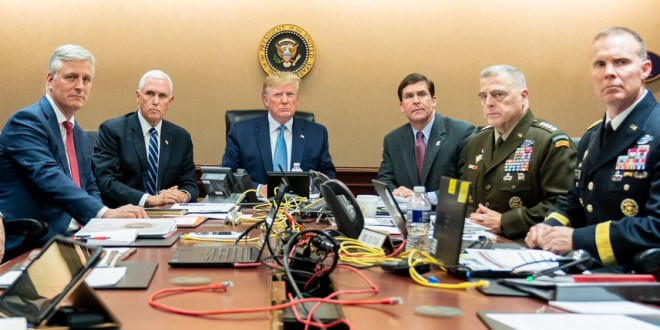 The good news is that Abu Bakr al-Baghdadi, the leader of ISIL, was killed Saturday night in a U.S. raid. He was evil, and bye-bye.

The bad news is that Trump — who had explicitly and repeatedly complained of Obama getting ANY credit for the raid that led to bin Laden's death — is crowing about this hollow victory. Hollow because al-Baghdadi was probably not running ISIL anymore. Perhaps more hollow because Trump's rhetoric could spark terrorist attacks. (Chickenhawks always talk big when it's not their asses on the line.)

Pathetically, Trump clearly staged his war room photo, which purports to show himself and advisors receiving the information that al-Baghdadi was dead. The computers aren't plugged in, the men are looking uncomfortably in different directions and it has been confirmed that Trump was golfing when the raid started ... and continued golfing.

The photo was taken later or earlier. For show.