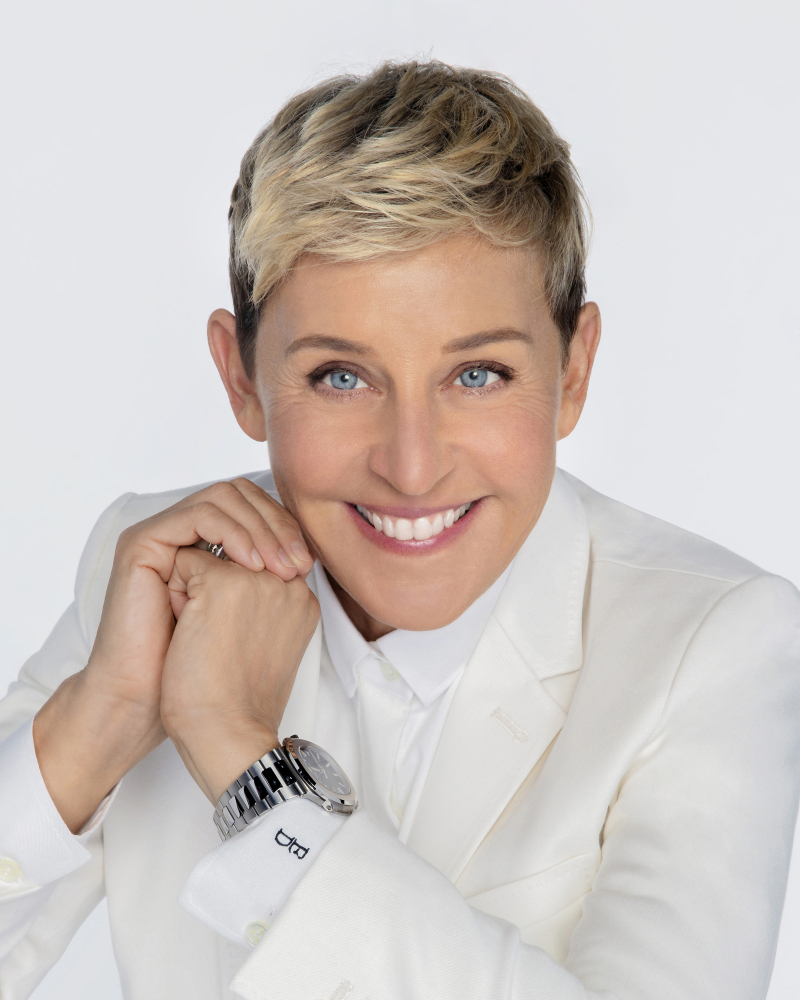 Ellen DeGeneres receiving the Carol Burnett Award at the Golden Globes. That, my friend, is gay. Full details after the jump ...

And no, George W. Bush isn't handing it to her. I'm hoping for, like, Richard Simmons.

The Hollywood Foreign Press Association (HFPA) announced today that three-time Golden Globe nominee Ellen DeGeneres will receive the Carol Burnett Award. The beloved household name is the second recipient to be honored with the accolade, the first having been its namesake, Carol Burnett. DeGeneres will accept the honor at Hollywood’s Party of the Year® on Sunday, January 5, 2020 airing LIVE coast-to-coast from 5:00-8:00 p.m. PT/8:00-11:00 p.m. ET on NBC.

“The Hollywood Foreign Press Association is delighted to honor Ellen DeGeneres with the Carol Burnett Award,” said Lorenzo Soria, President of the HFPA. “From her sitcoms, to stand-up, to becoming a household staple on daytime television, she is a pioneer who has captivated audiences for nearly 25 years with her undeniable charm and wit. In addition to her television success, she’s an advocate and philanthropist, lending her voice to those who don’t have one, and spreading kindness and joy through the power of her platform. We look forward to celebrating her achievements at this year’s ceremony.”

Chosen by the HFPA Board of Directors, the Carol Burnett Award is presented annually to an honoree who has made outstanding contributions to the television medium on or off the screen. As the television landscape continues to evolve with more thought-provoking programming, diverse roles and best in class content, the HFPA established the Carol Burnett Award to celebrate the medium’s new Golden Age. Equivalent to its film accolade counterpart, the Cecil B. DeMille Award, the top honor was first introduced at the 76th Annual Golden Globe Awards.

DeGeneres’ career began as an emcee at a local comedy club in her hometown of New Orleans. Her acting career in television included roles in several successful sitcoms before being offered a part in “These Friends of Mine” by ABC. Following the first season, the show was renamed “Ellen.” Running from 1994 to 1998, the show garnered record ratings with DeGeneres receiving multiple Golden Globe and Primetime Emmy nominations. In 1997, DeGeneres was the recipient of the coveted Peabody Award and earned a Primetime Emmy Award for writing the critically acclaimed “Puppy Episode” where her character came out as a gay woman to a record 46 million viewers.

She has made a home for herself in daytime with her hit syndicated talk show, “The Ellen DeGeneres Show,” and recently announced the show’s renewal through the 2021-2022 season. Currently, in its seventeenth season, the show has earned a total of 63 Daytime Emmy® Awards, including 11 for Outstanding Entertainment Talk Show crowning it the record holder in this category. In addition, DeGeneres has won 12 Teen Choice Awards, and she is a 21-time People’s Choice Awards winner, making her the most decorated individual in the 44-year history of the franchise. Most recently, DeGeneres won her fourth Kids’ Choice Award for Favorite TV Host for “Ellen’s Game of Games.”

In November 2016, DeGeneres was honored with the Presidential Medal of Freedom presented by President Obama. The prestigious award is the nation’s highest civilian honor and was bestowed on DeGeneres for her extraordinary contributions to notable change and progress in the United States. She was also presented with the 15thAnnual Mark Twain Prize for American Humor by the John F. Kennedy Center for the Performing Arts in October 2012.

She also received critical success for her HBO stand-up specials: “The Beginning” received two Primetime Emmy nominations in 2001 and “Here and Now” was nominated for two Primetime Emmys in 2003. In 2018, DeGeneres returned to her stand-up comedy roots after a 15-year hiatus with the critically acclaimed Netflix comedy special, “Relatable.”

Both on and off-screen, DeGeneres’ humanitarian efforts take center stage. In 2018, DeGeneres established The Ellen Fund, which supports global conservation efforts for critically endangered species. The first initiative of the fund is to build The Ellen DeGeneres Campus of the Dian Fossey Gorilla Fund. The campus will permanently secure the future of wild gorillas in Rwanda by building on successful field conservation efforts while empowering the people living near the gorillas to thrive in relationship to their ecosystem. This project allows Ellen to carry on the legacy of her hero, visionary scientist Dian Fossey, joining her as a protector and champion of the critically endangered mountain gorilla. DeGeneres has also brought awareness to the anti-bullying issue by creating a PSA titled, “Be Kind.” Overall, “The Ellen DeGeneres Show” has raised over $95 million for various causes.