BELOW: Keep reading for all the bad news — if you're Trump ...

He went! (GIF via GIPHY)

DDHQ: Democrat Andy Beshear has won the Kentucky governorship, ONE DAY after Trump told his own supporters at a rally there, and I quote:

Here's the story: If you win, they 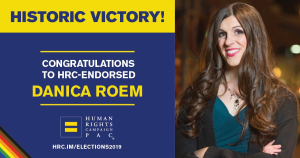 are going to make it like, ho hum. And if you lose, they are going to say Trump suffered the greatest defeat in the history of the world. You can't let that happen to me!

DAILY KOS: Dems took over the Virginia Senate — for the first time in a dozen years.

INSIDE NOVA: Juli Briskman, that cyclist who gave Trump's motorcade the finger and was shit-canned for it? Yeah, she just unseated a Republican to win a supervisor race in Virginia. A, uh, Trump golf course is within the district she won.

Big victory tonight for #bikeva with the election of Juli Briskman to the Loudoun County Board of Supervisors. Her district includes a certain local golf course favored by a certain local Florida Man. pic.twitter.com/cOKsCrAfOG

DID YOU KNOW: Democrats have won the city council majority in Columbus, Indiana, hometown of VP Pence and Congressman Pence, for the first time since 1981. #ElectionDay