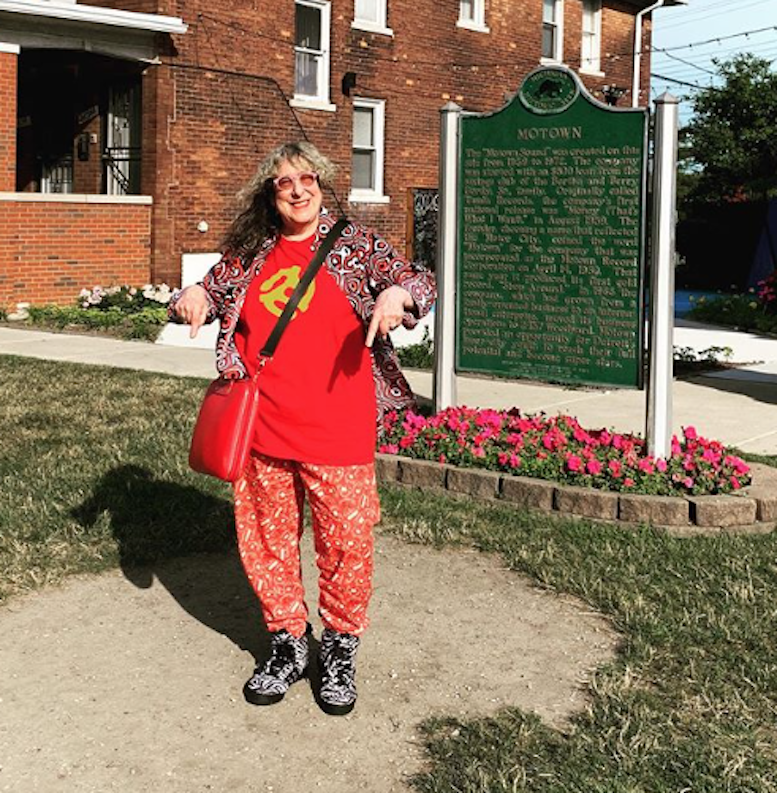 Allee Willis, a colorful and accomplished songwriter of iconic hits for Earth, Wind & Fire and of the Friends theme song, died Tuesday in L.A., ExtraTV reports. The cause was cardiac arrest.

Her partner of 27 years, artist Prudence Fenton, posted an image of Willis outside Motown in tribute to her, writing:

A selfie showing an exuberant Willis, Fenton and a friend had been posted the day before Willis's death.

Willis was born November 10, 1947, in Detroit. She has said she was ill-suited to a career as a songwriter, but that she absorbed music by sitting on the lawn outside the Motown offices. She reminisced in a New York Times interview last year that she would hear beats that way and later identify them in hit songs released to radio.

In the same interview, she described her obsession with music with characteristically blunt poetry:

I hear melodies constantly. I always say, “If you were to drop dead, I could write to the clunk of the body.”

With Motown in her blood — a bone of contention between herself and her late dad, who explicitly warned her to steer clear of “black culture” — she worked for Epic and Columbia writing liner notes and ads ahead of released her first and only solo album, Childstar (1974). Clearly inspired by Carole King, the album has its charms but flopped; Willis decided quickly that she took no pleasure from performing.

Soon, she was collaborating with the likes of Bonnie Raitt (the first artist to cover her work) and Patti LaBelle, but it was a chance meeting with Maurice White of Earth, Wind & Fire that led to her greatest successes. Together, they wrote the perennial wedding-reception hymn “September” (1978), which was a #1 R&B hit and #8 Hot 100 hit and sold 10 million copies in its first year. With Bob Lind, she also wrote the classic “Boogie Wonderland” (#6 on the Hot 100 in 1979), another Earth, Wind & Fire hit.

Among Willis's other big hits: “Neutron Dance” (1983; #6 hit when released in 1985) by the Pointer Sisters and “What Have I Done to Deserve This?” by the Pet Shop Boys with Dusty Springfield (#2 in 1987). Springfield was arguably the artist who came closest to singing Willis's work in Willis's voice. She also collaborated with Debbie Harry on this gem.

Duking it out with “September” for the title of her most iconic output was her song “I'll Be There for You,” written with Friends producers David Crane and Marta Kauffman, Kauffman's husband Michael Skloff, and the Rembrandts' Phil Sōlem and Danny Wilde. Recorded in 1994 by the Rembrandts, the song became the classic theme song for the series Friends, which aired from 1994-2004.

Willis was Emmy-nominated for the theme.

Willis later worked with Brenda Russell and Stephen Bray on the music and lyrics for the Broadway musical adaptation of The Color Purple, which premiered in 2005 and was revived a decade later. She was nominated for a Tony and won a Grammy for her work on the show.

In 2018, Willis was inducted into the Songwriters Hall of Fame.

Along with her work in the field of music, Willis — a longtime friend of Paul “Pee-wee Herman” Reubens — was known for her massive collection of pop culture kitsch, which she displayed in her pink home in L.A., and which she also curated on her website Museum of Kitsch. In seeking to share her collection, she was an early resident of the Internet.

She is survived by her partner, her sister and her brother.