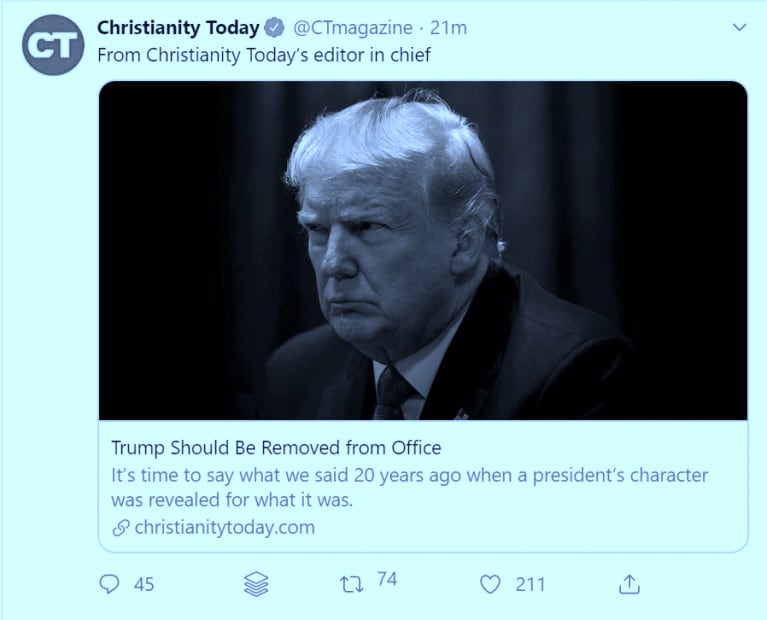 The essay says, while claiming Dems have unfairly had it in for Trump from day one (who, us?):

But the facts in this instance are unambiguous: The president of the United States attempted to use his political power to coerce a foreign leader to harass and discredit one of the president’s political opponents. That is not only a violation of the Constitution; more importantly, it is profoundly immoral.

The reason many are not shocked about this is that this president has dumbed down the idea of morality in his administration. He has hired and fired a number of people who are now convicted criminals. He himself has admitted to immoral actions in business and his relationship with women, about which he remains proud. His Twitter feed alone—with its habitual string of mischaracterizations, lies, and slanders—is a near perfect example of a human being who is morally lost and confused ...

... To the many evangelicals who continue to support Mr. Trump in spite of his blackened moral record, we might say this: Remember who you are and whom you serve.

The essay is particularly searing in that it uses the publications own arguments regarding the immoral Bill Clinton against Trump (a rare example of an Evangelical source avoiding hypocrisy), and name-checks its founder — the Rev. Billy Graham (a goody-goody who was, of course, a lying anti-Semite).

Rushing to make a damn fool of himself as always, Graham's son — the religious version of Donald Trump Jr. — Franklin Graham has published a response to the Christianity Today piece, asserting:

We have no way of knowing whether Billy Graham, who died at 99 in 2018, voted for Trump; probably. But we do know that voting for unknown-quantity Trump is not a rubber stamp of approval no matter what Trump did between 2016 and now, so the point is moot. More important is the fact that a leading Christian publication stuck its neck out to say the obvious: Trump is unfit on every level to serve as president.