ABOVE: It's true because it's funny. 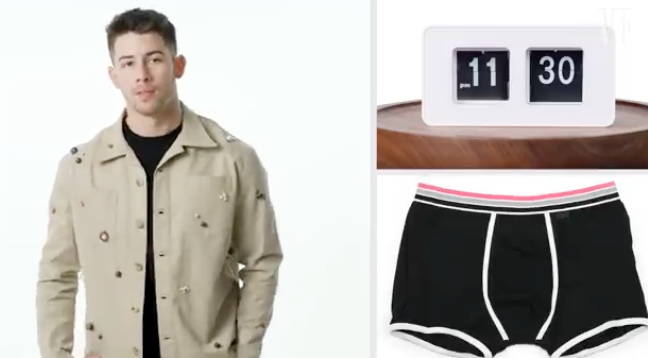 OMG.BLOG! (WORK UNFRIENDLY): Nick Jonas, in his own voice, describes wearing only boxer-briefs to bed because:

I get really warm when I sleep.

CNN: Another terrific candidate bites the dust: Julián Castro, whose campaign never caught fire, is out of the 2020 race. I still wish he'd been Hillary's running mate.

FLORIDA POLITICS: Fascinating read — a lifelong Republican on not being able to go with the Trump flow:

I really don’t have a vision of a post-Trump era anymore. All I know is he’s got to go.

The Rod must be crazy! (GIF via 20th Century Fox)

WGN: Rod Blagojevich is already high on anyone's list of Most Republican Democrats, convicted from brazenly trying to sell Barack Obama's Senate seat when Obama left to become POTUS. From where he rots in prison, Blago has written an op-ed in which he argues that today's Democrats would have impeached Lincoln, the evidence against Trump is so flimsy.

On a related note, Trump has made clear he thinks Blago got a raw deal and could pardon him or grant hm clemency. Anything related to Obama, Trump despises, so I guess the enemy of his enemy is his friend. Plus, Trump probably thinks selling a Senate seat is not a bad idea.

TWITTER: Mark McGrath of Sugar Ray is a total Trumper, and spent NYE at Mar-A-Lago to prove is. Remember the following — this alpha-male-with-tiny-dick syndrome always leads to creaming over leaders like Trump:

Now that Mark McGrath is trending, I figured it was the best time to share one of my favorite celebrity videos.

In the early 2000s, he freaked out when someone called him “Sugar Gay” when leaving a nightclub: pic.twitter.com/bAiZu5Vny3

EXTRATV: Nick Gordon, Bobbi Kristina Brown's ex-fiancé — and abuser — died on New Year's Day at age 30 following a drug overdose. He was dumped at a hospital by the people he was partying with on New Year's Eve. No bathtub in sight, but kind of worse. Reminder: Gordon had been found liable for Brown's death at 22, for which he was on the hook for $36 million to her estate.

YOUTUBE: Retired Gen. Wesley Clark tossed his ringing cellphone during a CNN interview this weekend. This guy is ready for a grenade! (Madonna once endorsed him for president, BTW.)

NIEMANLAB: Geneva Overholser has turned in an important piece that calls for “death to bothsidesism,” and that nails The New York Times for it. It's a must-read. If you have Facebook friends, you should know what bothsidesism is, as people engage in it on the daily. From Overholser's screed:

Here’s a recent example: One politician makes an appeal to hold a president accountable. Another responds by telling the first to put aside partisan politics. One statement will stand as historic; the other is nonsense. But the reporter solemnly adds: “But the appeals to rise above the tribalism of the moment from the two veteran lawmakers fell on deaf ears.” The distortions in the name of balance grow more painful as the article continues.