ABOVE: Caged Jock is giving you OnlyFans access if you donate $10+ to the Australian wildfire effort.

BELOW: Keep reading for news on the 8teenBoy star accused of selling child-porn vids featuring his own brother, Trump's scary presser and more ... 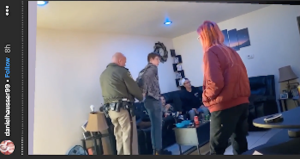 NYDN: A 93-year-old man, angry over water damage in his Las Vegas apartment, calmly shot the property manager in one leg, then the other, before being taken down hard by security. I'd've beaten this old creep to death as soon as that gun came out. I'm shocked this became so drawn out, considering his feeble demeanor. I feel for the victim. I hope the old guy dies immediately.

Susan Rice: “This is another series of despicable lies by President Trump. The fact that three years after taking office he remains obsessed with President Obama just shows President Trump’s extreme weakness and insecurity.” pic.twitter.com/POtl1E3niI

JOE.MY.GOD.: The day after Iran attacked U.S. bases in Iraq, Trump slurs and gasps his way through a presser to say it appears the country will stand down. I'm sure he's disappointed, even though his A-hole enablers are probably desperately hoping he takes the win. He also blamed Obama! Andrea Mitchell notes Trump has the worst-ever national security team ever.

TWITTER: Long-running gay writer Michael Musto has noted the closure of long-running gay magazine/site Metrosource, who had just named its People We Love. I was never a Blogger They Loved, but The Advocate once chose me among its 30 Under 30 — and I absolutely was under 30.

The long running gay magazine (and site) Metrosource has sent its workers packing. And they were all set to have their annual People We Love gala next Tuesday! They’ve suspended publication 'pending reorganization.' But they were all given severance, so it looks dire.

.@AndrewYang on if he would be open to taking a vice president role: “I’m here to help solve the problems that affect us all, that we’re leaving for our kids. If that’s as president, great. If that’s in some other capacity, also great.” https://t.co/jhchHqtnr5 pic.twitter.com/i74vUgt8S7