ABOVE: He's all caught up.

BELOW: Keep reading for Person George speaking out, Iran vs. that plane, Pelosi on impeachment articles, Dave Chappelle's hollow defense of humor and more ...

He wanted to float this by you ... (Image by Benjamin Veronis for DNA)

ENTERTAINMENT WEEKLY: ABC is developing a sequel to thirtysomething. Maybe with a working title Dead-ish? 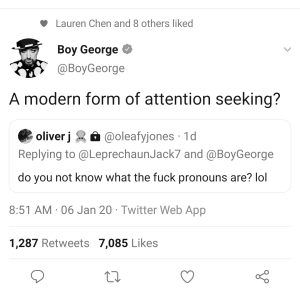 has mocked the movement to choose one's own pronouns as “a modern form of attention seeking.” George was promptly supported by an anti-trans gay group. First, a man who dresses in traditionally feminine attire and has spent his career pulling stunts has no standing to whine about attention-seeking. Second, why are so many older gay men, in particular, so uselessly incensed by pronouns? It's no skin off our backs. It does not diminish anyone else. The resistance comes off as the last gasps of cranky antiques. When I have recoiled at aspects of new takes on gender or what it means to be gay or what have you, I have been able to recognize it's some misguided sense of feeling judged for not having gotten it right up till now. If that's not where it's coming from, if someone is simply saying they want to be called Boy George or want to be referred to by a certain pronoun or like to sleep with people of their gender ... why should that bother people so much? Anti-gay people have reacted the same way to gay people — with derision, by belittling it as a phase or a way to be noticed. P.S. Boy George falsely imprisoned an escort. So HE can fuck off.

SCREEN RANT: Dave Chappelle is full of it, too. Comedians (and all white people frustrated with what they call PC but what is really just common decency) are so fond of saying that people need to lighten up, it's just jokes, but then they also claim humor is some sacrosanct form of communication. Accepting the 2019 Mark Twain Prize, Chappelle went so far as to passionately defend it as “truth.” When you're pitching your humor as truth, but then get mad that it offends people, you're just a narcissistic bully. So it's not a surprise that Chappelle's got a lot of MAGA fans. Ann Coulter adores him. That's your fellow audience, for those of you who think Ricky Gervais and Dave Chappelle are brilliant.

Speaking of truth, Chappelle ranted in his Netflix special about Jussie Smollett, and said some funny stuff. But one of his set-ups was that gay people criticized black people for being homophobic in not defending Smollett. I'm sorry, that was not a thing. That didn't happen. Victim advocates were mad at anyone for doubting him, and there were a lot of people in the black community who defended him, but nowhere did I see gay people complaining that black people were not supporting him. So there's one example of how humor is not sacrosanct, can be very divisive propaganda, and is not, in fact, truth.

Chappelle makes a good point about how having leverage can buy you freedom. But look what he's using his leverage to do — trash trans people, call gay people faggots. It's not clever or humorous, and deciding not to trash people (you can tell when it's from a place of love, something else he alludes to in his comedy) for who they are, as a group, is not being PC.

Finally, it utterly amazes me that so many gay men are RAH-RAH! anti-PC, when how many times has a public figure said something truly nasty about gay people, whether as a mean-spirited joke or not, and we have felt it, and have been offended by it, and have recognized it was feeding a culture that leads to suicide and despair. And yet we're ready to pretend PC is the enemy? We're ready to pretend that not being a homophobic or transphobic or racist jerk is the enemy? Don't come crying to me about Eddie Murphy's '80s AIDS jokes if you're all in with this crap.

POLITICO: Fans of Trump explain why he is our O.J. (Gross off the bat, but okay.)

TPM: Pelosi will send Articles of Impeachment to the Senate “when I'm ready. And that will probably be soon.”

CNN: McConnell has already admitted he is coordinating the impeachment trial with Trump's lawyers. Now comes word they met one-on-one in the White House to chat about the trial. What a joke.

TRUE CRIME DAILY: A Mount Holyoke professor was charged after she viciously attacked a female colleague she'd just professed to love. The attack, at the victim's home, was allegedly caried out with her fists, rocks, a fire poker and gardening shears. Love is never having to remove gardening shears from your noggin.

CNN: Steve Lazarides, Banksy's former agent and a photographer who was tasked with capturing the anonymous artist at work, is publishing a book showing Banksy ... but not his face. 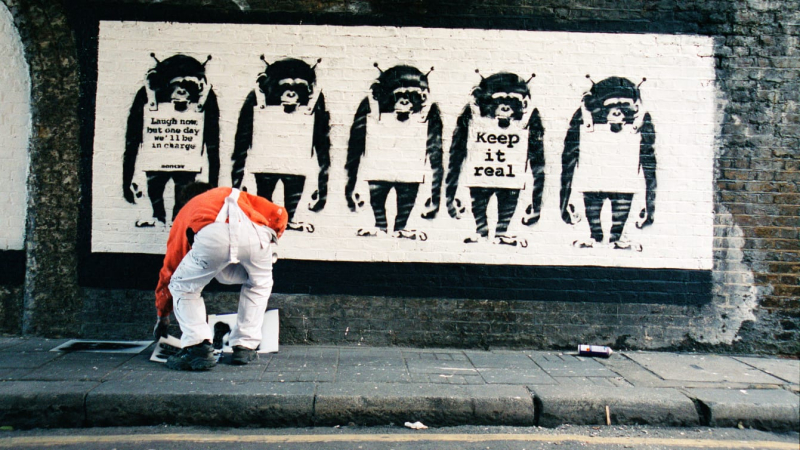