May The Best Picture Win: PARASITE Triumphs At Oscars 2020 Comments (0)

History was made, and the best Best Picture won. (GIF via GIPHY)

Last night's Oscars: I did not like the overall pace, which dragged, the lack of genuine stars who were stars prior to 2000 (the stunning Jane Fonda and Diane Keaton as stand-out exceptions), or the decision to make it such a music-heavy show. The ceremony is supposed to honor films, so cutting featured spots to hype up each Best Picture winner and moving away from giddy, themed montages in favor of song did not work for me.

Fonda savored the moment before announcing the winner. (GIF via GIPHY)

The live music was almost uniformly dreadful, too. Poor Janelle Monáe's opening was just shy of Snow White infamy, with Billy Porter flirting with overextending himself, and the only tune nominated for Best Original Song that deserved the nomination was “Stand Up,” as evidenced by Cynthia Erivo's stirring performance of it. Had that award been voted on live, in-house last night, she'd have romped, but — of course — Sir Elton John's slapdash number from Rocketman was guaranteed the win the moment Taron Egerton was eg-ed out for an acting nod.

Martin Scorsese thinks: “I should've given the girl more lines.” (GIF via Slate.com)

That said, I wouldn't have minded Eminem as much had they announced him in advance. I think hyping his appearance would have — I dunno — helped with their ratings, and would have established how inspired it was to give him a chance to perform his Oscar-nominated song (it went on to win) 18 years later, since the first time around, he'd been forced to choose between a censored version or no performance at all. (He chose the latter, then was shocked and not in attendance when he won.) Not a fan of his, but I appreciate the story, and I think social media would have, too, had the groundwork been laid.

I also am in the minority, but 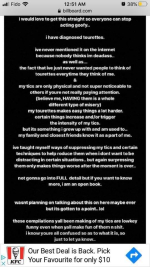 loved Billie Eilish's presence. I found it funny that she scrunched up her face when she was shown in the audience. To me, it was clearly, “Don't show me! Why me?” and not, “Ugh, Kristen Wiig and Maya Rudolph aren't funny.” However, she also has Tourette syndrome, and has asked people not to overly focus on her tics, a plea that has been ignored.

Her salute to mumblecore with “Yesterday” during the otherwise atrocious in memoriam was a confident musical choice, and I'll never be okay with a successful 18-year-old who's already questioning her luck being pilloried all over social media by people two, three, four times her age. Didn't like the singing? Okay. “Hate” her? Delete your brain.

I came up with 21 names (acting only) who did not appear in the in memoriam who might have. Not all of them are egregious oversights, but 10 or 12 are. Call me old-fashioned, but I think when you've been nominated for an acting Oscar or have appeared in an iconic film or scene, you need to be in there. Ditto if you've had a 100-year film career, as Fay McKenzie did.

Overall, though, I loved the stage design — when Parasite won (more on that later) at the end, it looked like a dazzling, digital ticker-tape parade. The look of the stage enhanced the importance of the moment.

Chris Rock and Steve Martin were okay, and I think were transitional — next year, I bet we get a host again.

The Academy's efforts to make the show more diverse than the nominees will be derided, but mostly by white people who “aren't racist, but ...”; I thought it was uplifting and a good-faith effort. The more that happens, the more likely the stodgy, white-majority, male-majority, just-plain-old-and-crotchety wing of the Academy will become comfortable nominating not only a more diverse group, but individuals from a broader range of films.

The only miss that truly bothered me was Honeyland failing to win Best Documentary, which it was. It is both a fine documentary as well as visual art, and that's why it was nominated for Best Doc as well as Best International Feature. I had hoped that since voters knew it had zero chance of beating Parasite in the latter, they would default to voting for it in the former. But alas, the Obama-powered American Factory — a good, solid doc that stuck with me, to be sure — prevailed.

But to the voters' credit, Parasite absolutely did make history with its Best Picture win, the first international feature to do so, a year after Roma probably came pretty close. I'm sure 1917's war-movie appeal and Once Upon a Time... in Hollywood's hometown homage came close, but in the end, Parasite was recognized as the instant classic it is, a new Hitchcock film 40 years after the master's unfortunate demise.

In fact, filmmaker Bong Joon-ho narrowly missed tying Walt Disney's record of four Oscars in a single night (1954); the only reason he can't be said to have actually tied is that Best International Feature goes to the film's home country, not the filmmakers. Which is insanity.

A-listers demanding that Parasite's producers be allowed to speak. (GIF via GIPHY)

Parasite's achievement is indicative that, at least to me, while the show was leaden, the actual winners were mostly spot-on and, for a change, spread out. The only film nominated for Best Picture not to win a damn thing was The Irishman, and while I wish that dishonor had instead gone to the pedestrian (see what I did there?) Ford v Ferrari, I can live with it. It might've been nice for Joe Pesci to pick up an award on his birthday, but Best Supporting Actor Brad Pitt absolutely deserved the honor, as did Best Supporting Actress Laura Dern, Best Actress Renée Zellweger (entering the two-time-winner club with grace and due deference to no-time-winner Judy Garland) and Joaquin Phoenix.

For me, the only moment that came close to eclipsing the sheer joy of Parasite winning was Laura Dern winning, and acknowledging her parents, Diane Ladd and Bruce Dern, both of whom have toiled all their lives without an Oscar win. It truly felt like she was winning one for them all, and because Dern is a uniquely admired and well-liked figure in her field, for us all.