BELOW: Keep reading for the death of a Desperately Seeking Susan cast member, COVID-19 causing record unemployment, hope in the form of a new ventilator, Kathy Griffin falls ill and more ... 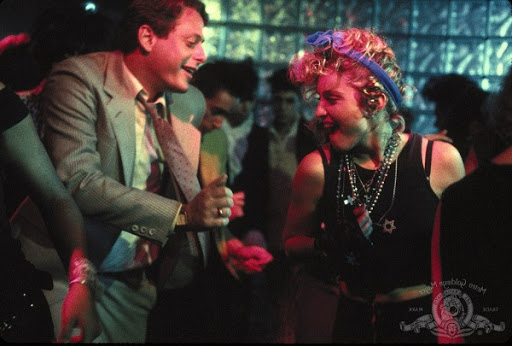 Oh, my God — he was a brilliant actor. (Image via MGM/Orion)

BROADWAY WORLD. Mark Blum, veteran stage actor who was unforgettable as Gary Glass in Desperately Seeking Susan, died this week at 69 of COVID-19. Blum was a terrific actor, widely respected, and when I met him in 2010 at what now feels like the last, most complete Susan reunion, he was a prince, truly.

I'm Mr. Pic-With, but this is one of my proudest pics. I love this film utterly. (Image by Matthew Rettenmund)

My video of him:

TWITTER: It's a very simple ad. Trump hates it, hates it to the extent of sending cease-and-desist letters. Share it everywhere:

CNN: James Dyson designed a new ventilator in 10 days, and is committed to creating 15,000 of them to fight COVID-19.

EXTRATV: Kathy Griffin is unbearably ill, possibly with COVID-19, but can't get tested. She is using her platform to rail against Trump's provable lies.

POLITICO: The San Francisco Bay area is the nation's bellwether on social distancing.

God only brought one guy back from the dead on Easter. Trump is here to bring back the whole economy on Easter 2020. Enjoy this clip (possibly, like, the best ever), share and be sure to subscribe to Making Podcasts Great Again (@TrumpPod) - new every week! pic.twitter.com/aUifVWRzfh

We may well be in a recession.

But I would point to the difference between this and a normal recession. There is nothing fundamentally wrong with our economy. Quite the contrary. We are starting from a very strong position.

THE GUARDIAN: How COVID-19 is wrecking wedding plans.

Not saying it's a direct inspiration, but maybe? (Images via Hugo Comte & Versace)

YOUTUBE: Dua Lipa's “Break My Heart” is here, with its “Another One Bites the Dust” bassline and other delish references. She's great, no?

GR8ERDAYS: Celeb b'days — follow here if you're into this sort of thing — include Miss Ross!