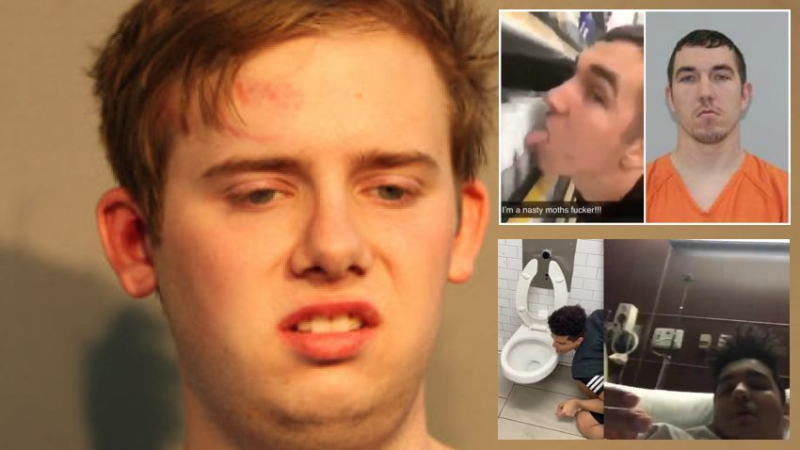 TRUE CRIME STORY: There's a proud Chicago mama out there somewhere! Anthony Ponzi (is it a stretch to wonder if he makes his friends call him The Ponz?), 21, is alleged to have coughed in the faces of Chicago cops and claim to them that he had COVID-19. Yeah, he was prolly drunk. Still, his sainted mother will think twice before bragging about her Anthony's infectious personality. (MORE)

LAD BIBLE: Another genetic jackpot, 26-year-old Missouri resident Cody Pfister, filmed himself licking a row of toiletries at a Walmart, in defiance of coronavirus warnings. For his efforts, he was arrested and charged ... with making a terrorist threat! Seems harsh, but I don't care, because Missouri thinks coronavirus is a hoax anyway, so he definitely won't get it in prison.

TWITTER: A Twitter user with the redundant handle @gayshawnmendes posted an image of himself licking a public toilet bowl, then followed it later with a selfie that appears to show him hospitalized with coronavirus. There is no confirmation as to who he really is or as to whether he really got sick, but Twitter deleted his account — yet preserved the accounts of Donald Trump, Glenn Beck, Brit Hume, Texas Lt. Gov. Dan Patrick and others, all of whom have suggested or said that older people and sick people should die in order to save the economy. Which is worse?

Brady Sluder, the apple-cheeked spring breaker who wantonly dared COVID-19 to take him, has abjectly apologized for his actions in a lengthy Instagram post. I don't care of The Ponz's mom wrote it for him, he at least owned up to his breathtaking (literally!) stupidity, writing:

I’ve done a lot of things in my life that I’m not proud of. I’ve failed, I’ve let down, and I’ve made plenty of mistakes. I can’t apologize enough to the people i’ve offended and the lives I’ve insulted. I’m not asking for your forgiveness, or pity. I want to use this as motivation to become a better person, a better son, a better friend, and a better citizen. Listen to your communities and do as health officials say. Life is precious. Don’t be arrogant and think you’re invincible like myself. I’ve learned from these trying times and I’ve felt the repercussions to the fullest. Unfortunately, simply apologizing doesn’t justify my behavior. I’m simply owning up to my mistakes and taking full responsibility for my actions. Thank you for your time, and stay safe everyone. ❤️

The heart really seals the deal.