BELOW: Keep reading for one hell of a hunk, Feel Good on Netflix, Cuomo scolding NYC and more ...

GR8ERDAYS: Just a reminder that the late, great Clint Walker was a PIECE.

EXTRATV: Pose star Angelica Ross was feeling cute and posting about her new BF — then FBI Twitter did her a favor and informed her that he's engaged!

LGBTQ NATION: Trans woman shot to death in the back of an ambulance while receiving care. 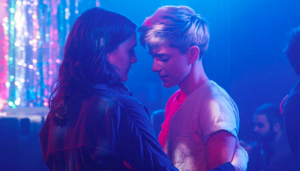 Martin's Feel Good on Netflix. It's about a stand-up comic who isn't sure where she fits on the gender and sexual orientation spectrums, her struggle with drug abuse and her charming, complicated love for a previously straight-up straight girl. As a bonus, the Mae in the story has an ice-queen mom played by — oh, no — Lisa Kudrow. Well worth your time.

HUFF POST: Dems have blocked a huge bail-out for corporations that the Senate was trying to pass off as COVID-19 relief, and are instead crafting their own bill in the House.

GAY STAR NEWS: An LGBTQ+ ER nurse is begging gay men to stop going out and hooking up, then bragging about it. Stay the F home.

MIAMI HERALD: Florida would've been better off with Gillum and his rentboy.

POLITICO: NYC is flunking the COVID-19 test, and Gov. Cuomo is giving us one day to figure out how to limit large gatherings of people. It's truly embarrassing. It's like the opposite of when 9/11 happened. People just don't care.

JOE.MY.GOD.: Loss of taste and smell could be early indicators that an otherwise asymptomatic (but infectious) carrier of COVID-19 has the virus.

TWITTER: Eric Trump is at least as stupid as his dad, who knows things:

For some reason @EricTrump deleted this tweet so we printed out huge copies of it and hung them all over Brooklyn. We think he’ll really appreciate it... let’s see if we’re right... pic.twitter.com/xMjVxaOvor

NYT: A McDonald's worker asks why the multibillion-dollar corp refuses to foot the bill for paid sick leave:

A shift manager at a McDonald’s restaurant in Kansas City, Mo., asks why a company that earned $5.3 billion last year can’t guarantee paid sick leave for all of its workers. https://t.co/5AWIY3UORc pic.twitter.com/u1YgHy1rNC