BELOW: Keep reading for the gay nurse who died because Trump won't help NY state with medical supplies, the Kentucky right-winger who apparently hopes the House of Representatives will get sick and die en masse, hot movie actors, Chrissy Teigen's courtroom drama and more ... Kious, 48, had been in good health. (Image via family photo)

TOWLEROAD: Gay assistant nursing manager Kious Kelly, who worked at Mount Sinai West in NYC and died of COVID-19, was reportedly exposed to the virus due to the city's lack of personal protective equipment. Workers at his place of employment had previously posed for a photo wearing trash bags to demonstrate how desperate things had become, but he still got sick and still died. Where is the federal government?

BBC: Boris Johnson, the UK PM who as recently as early March was floating the possibility that the country should just get sickened all at once to develop herd immunity (ignoring the countless people who would die during the process) is now positive for COVID-19.

Boris Johnson’s press conference from 2 weeks ago has aged like fine milk.

His presser from not long ago is ... yeah. Something.

(1/11)I swore an oath to uphold the constitution, and I take that oath seriously.

In a few moments I will request a vote on the CARES Act which means members of Congress will vote on it by pushing “yes” or “no” or “present.”

TWITTER: Libertarians. Are. Monsters. This douchebag Republican congressman out of Kentucky, Massie, insisted on a vote in the House on the COVID-19 relief bill, thus forcing a quorum of reps to return to D.C., endangering their health and the health of countless others. He did this knowing his action would fail anyway. He wanted to make a point. I guess the point is: Right-wingers will kill you with a smile. 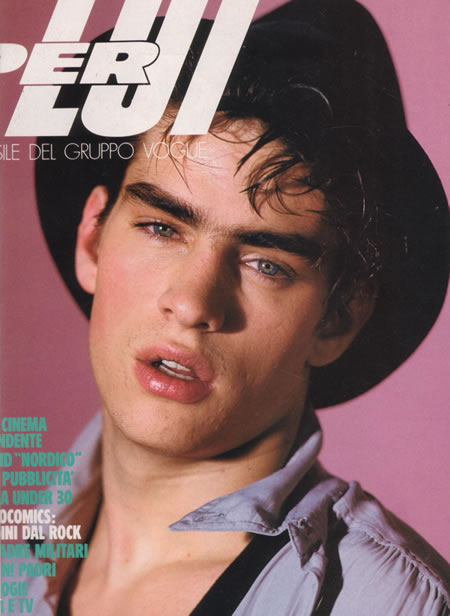 Rodney Harvey was perfection, but addiction destroyed his career and his life. (Image via Per Lui)

BOY CULTURE: My list of History's Hottest Movie Actors could help pass your time. I have some obvious and not-so-obvious picks and pics.

ANOTHER GUY BLOG: I mean ... he's wearing a mask, so does that mean we're safe?

TWITTER: Dr. Birx is 100% a propagandist now. She needs to go, or at least needs to be ignored:

"[Trump is] so attentive to the scientific literature & the details & the data. I think his ability to analyze & integrate data that comes out of his long history in business has really been a real benefit” -- this is shocking, hackish stuff from Dr. Birx. pic.twitter.com/c2phsRYaJs

THE HILL: A member of D.C. Mayor Muriel Bowser's staff has died of COVID-19.

GREG IN HOLLYWOOD: Some people, even during a pandemic, think the world revolves aroundt them.

GR8ERDAYS (FOLLOW HERE): The great Gloria Swanson was born on this day in 1899. Amazing to think she was considered such an antique when she was running around in the '70s and early '80s extolling the virtues of health food and Ronald Reagan — she was only in her 70s, and died right after turning 84, not so extraordinary these days. I think something about having been a Silent Era figure and then persisting after counted for an extra 100 years.