ABOVE: Would the prospect of staying home with him convince you to socially distance?!

BELOW: Keep reading for hot boys, Trump trying to corner the market on a COVID-19 vaccine, Biden soaring in polls and more ...

NBC NEWS: In the middle of botching his pandemic response, Trump has time to consider a full pardon for Michael Flynn.

I would like to see a dramatic diminution of the personal interaction that we see in restaurants and in bars. Whatever it takes to do that, that’s what I'd like to see.

MOTHER JONES: Trump tried to buy exclusive rights to a coronavirus vaccine, fucking the rest of the planet.

DAILY BEAST: Boris Johnson knows up to 60% of the UK's population could get the coronavirus — and he's okay with that! He's leaving things 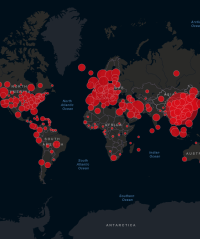 open in order to see if widespread exposure helps them build up immunity for future waves. And this experiment directly affects the rest of the world, including the U.S., which is allowing flights in from the UK until tomorrow.

ARCGIS: Today, the total cases of COVID-19 confirmed outside of China surpassed the total number confirmed inside China. Italy: 368 people died in a day.

EXTRATV: Heidi Klum and her husband have now been tested for COVID-19.

MSNBC: Biden leads Trump by 9 in new poll. I think this is what we will see in November — if both live.

CNN: Biden endorses Warren's bankruptcy plan. He's also on board with the Sanders plan to expanded college help that Hillary endorsed in '16.

You hate to see it, but unfortunately I am still employed. https://t.co/l2tkpyKBTq

KENNETH IN THE (212): In the same way that offering fake coronavirus cures is illegal, so should writing about them be — and kudos to Chelsea Clinton (and Charlie Savage) for putting the shitty National Enquirer on blast for doing just that.