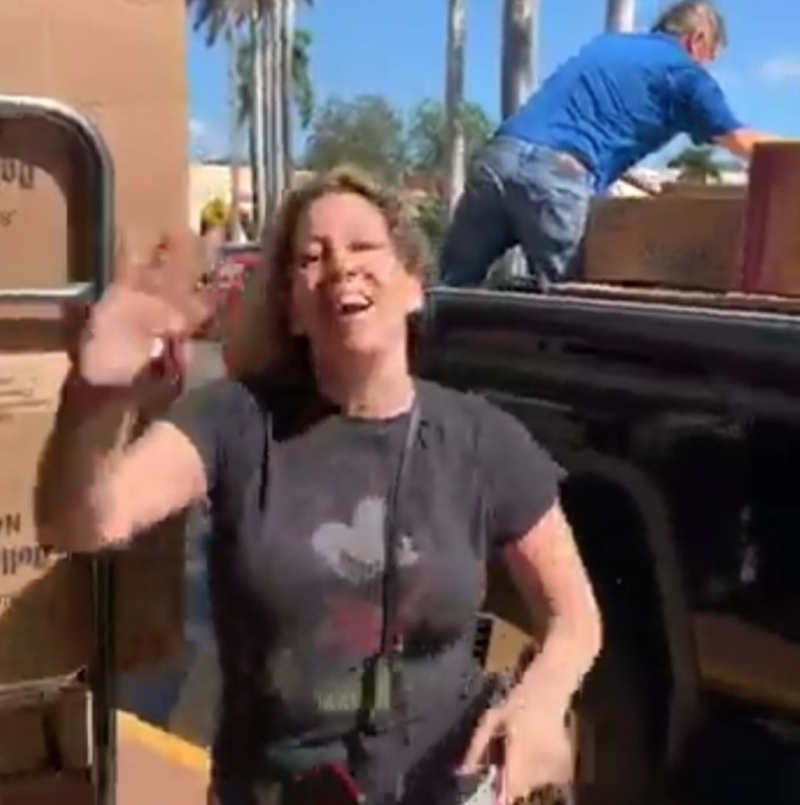 TWITTER: This cunt bought out an entire Dollar Tree of its paper products so that nobody else who shops at the more-for-less discount store could have any. She is probably planning to sell it to people, gouging them. Hoarding whore is also — guess what? — pro-Trump:

So this woman not only buys out a local Dollar Tree of every single box of paper towels, napkins, and toilet paper so that no one else can buy any, but caps it off with this:

POLITICO: Even a former Trump advisor thinks independent contractors should be bailed out during the COVID-19 crisis. Will they? The Senate is insisting on big corporate bail-outs, while Pelosi and the House are pushing for INDIVIDUALS to get relief. Which do you think is on your side? TWITTER: Follow me on Twitter to keep up with my blog and with some original content, like my long (long) list of LGBTQ and -adjacent movies to help get you through your time at home. One of the films I mentioned is Making Love. Re-watching it last night, I noticed that when Kate Jackson goes to confront a man she thinks is her husband's gay lover (he's really just a trick), he folds up his sofa bed, she has a seat ... and there's a big ol' jar of Vaseline on the end table. That's set design, baby.

TWITTER: Gov. Cuomo is saying 40-80% of New York will get the virus, and that the lockdown timeline could be “four months, six months, nine months”:

Here’s New York Gov. Cuomo saying the coronavirus lockdown could last as long as 9 months and that up to 80% of the population will get the virus pic.twitter.com/ghsmthfRmU

TWITTER: Biden vs. Trump — it's no contest. It's a man with empathy and experience (and yes, flaws; nobody thinks Biden is a Jesus figure) vs. an evil, soulless POS:

In times of crisis, a president should calm and heal, lead the way with a steady hand, and provide a beacon of hope for the American people.

Donald Trump is incapable of doing that. pic.twitter.com/0I7ZYNtqCV

SCIENCE MAG: News on testing to show whether a person ever had COVID-19, which would be very useful information.

EXTRATV: New Yorker Debi Mazar discovers she has COVID-19 after suffering characteristic symptoms. She's doing fine now, but describes what a pain it was to get tested — in stark contrast to Trump's lies that it's easy.

NEWSWEEK: Mazar felt sick last month, then felt like she got sick again — and calls her symptoms “morphy.” Can you get this shit twice? There isn't enough evidence yet, but there is a lot of discussion about it.

THE HILL: Mayor de Blasio is right here in calling Trump out for refusing to muster the full resources of the federal government to get supplies to hard-hit New York. It's Trump's own hometown! But I've read a good theory as to why Trump is holding back: Corporate greed. Seems to be the answer to most of his motives:

Cuomo not only showing leadership, but seeming to reveal why Trump won’t use Defense Production Act.

it would stop CEOs from price-gouging, from having NY, FL and CA compete for masks, for example, with supplies going to highest bidder.

BROADWAY.COM: It's The Rosie O'Donnell Show — again! Rosie is bringing her beloved talk show back tonight at Broadway.com and on the site's YouTube channel in a benefit for the Actors Fund. It'll be interesting to see her in talk-show host mode post-coming out and post-political awakening. I'm assuming she will hit Trump hard, but do so while interviewing (all remotely) the likes of:

I wouldn't be surprised if Madonna and her bathtub made an unannounced appearance: