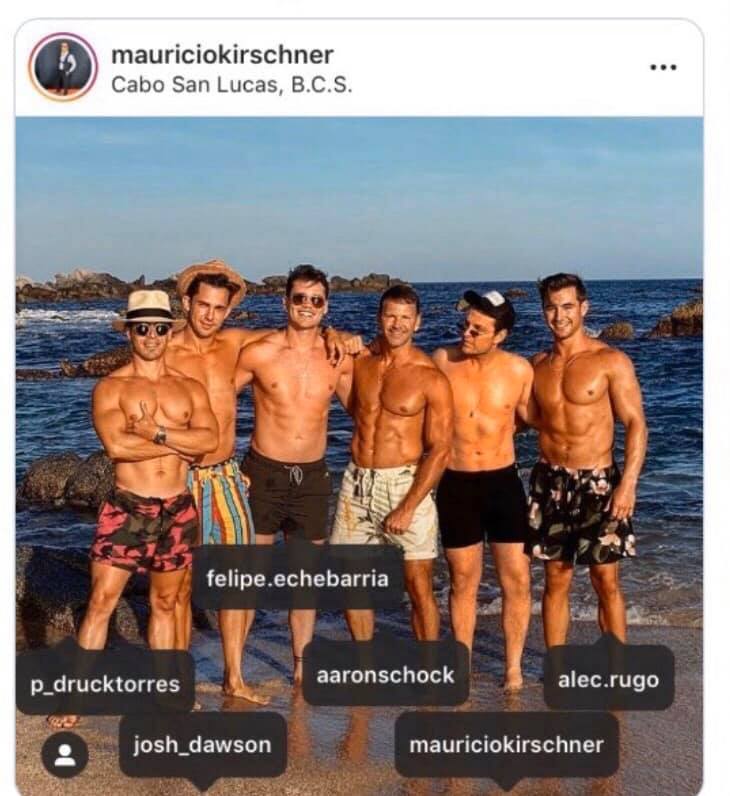 Via KENNETH IN THE (212): Disgraced former GOP congressman Aaron Schock, who came out earlier this year after many years of gossip about his indiscreet balancing of anti-LGBTQ votes with pro-cocksucking public appearances, is again demonstrating what a horrible person he is.

As Duke Mason has been unafraid to post repeatedly, Aaron Schock and the A-gays who cavort with him are terrible people. Currently, a gaggle of them is going from house to house in Mexico, partying it up on the beach, and they think this qualifies as sheltering in place. To make it worse, they're bragging about their jet-setting at every opportunity, which adds a layer of let-them-eat-cake nonchalance to their cake shots.

The pics that were shared come from the IG accounts of Mauricio Kirschner, whose House of Kirschner claims to be:

Architects of wedding and event ephemera, weaving magic from desire.

... and Alec Rugo. I've met and interacted with Rugo, a stunningly good-looking young guy who was acting as some sort of helper at a 2017 CockyBoys pool party to which I was invited, and which I photographed. He was very nice, very polite. I genuinely liked him. He has since hastily deleted his Instagram (20,000+ followers) and Twitter (on which he was exposed as having used the N-word and also called for Obama to be impeached in 2014, suggesting he's a homocon like Schock is).

It's annoying when cute people are not, in fact, cute. I definitely wanted to shoot Rugo. Here's why:

Tangentially of interest: Kirschner's posts have a suspicious number of oddly robotic comments, like, “Your content is really, really awesome,” suggesting he's paying some kind of service to generate them. (They're mostly from other influencer wannabes — read some and tell me you don't think they're fake.) This just underscores how empty and desperate these people are.

Some of the other guys in the pics are P Druck, a self-described entrepreneur who seems to do nothing but party, Felipe Echebarria and Josh Dawson.

Maybe some are just too young and too dumb, but they're not infants. Other people their age get what coronavirus is, and understand it's not wise to advertise a party-till-we-drop lifestyle during the crisis.

I'd like to see a picture of the moneybags who takes them all around the world for their photo ops, which, by the way, does not mean people shouldn't show off their beauty on social media — but there is a difference between an Insta-stud working their ass off and then choosing to reveal it and those who are just using social media to tell you they think they are truly a member of a privileged class and everyone is is garbage. It is okay to look at beauty and be moved by it, even in superficial ways, as long as you're not prioritizing it, making excuses for bad, bad behavior where it exists.

Finally, if you're lucky enough to be born pretty and comfortable enough selling that, go for it; but don't act like it's a choice everyone else has to make, and are just too stupid to do.