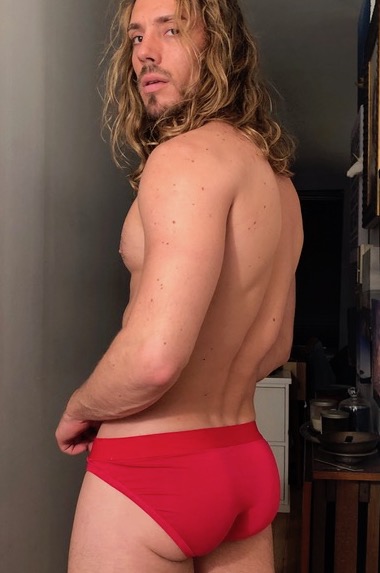 There are so many beautiful men on whom to feast on Instagram — and some of them have the brains and talent, or at least the kindness, to back up the back end. 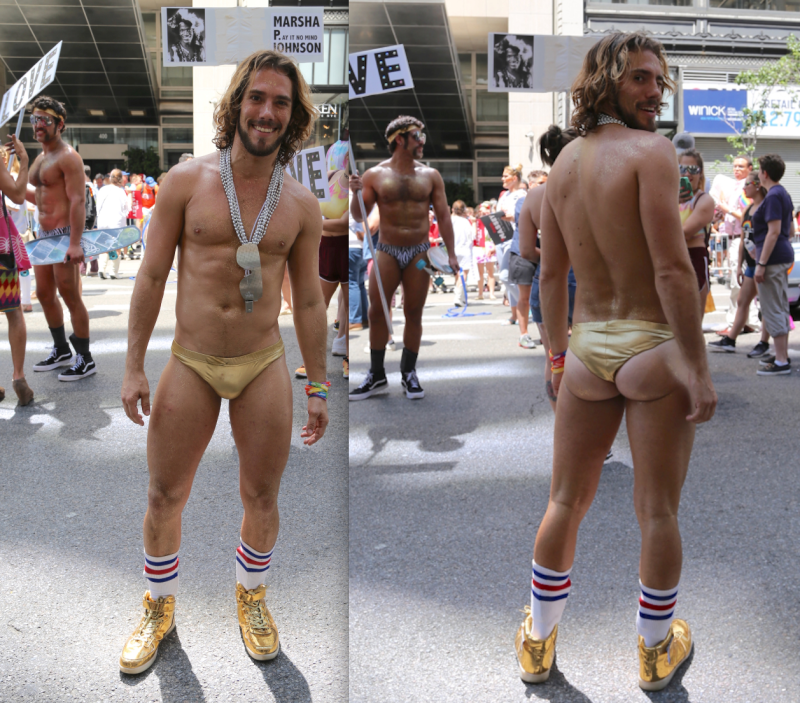 One of my favorite well-rounded fantasy figures is Mariano Rubin de Celis, a production designer and dancer I first encountered at the 2017 NYC Pride March (my best year, photographically). He looked like a Greek-passive god, and used to have the best butt in NYC. 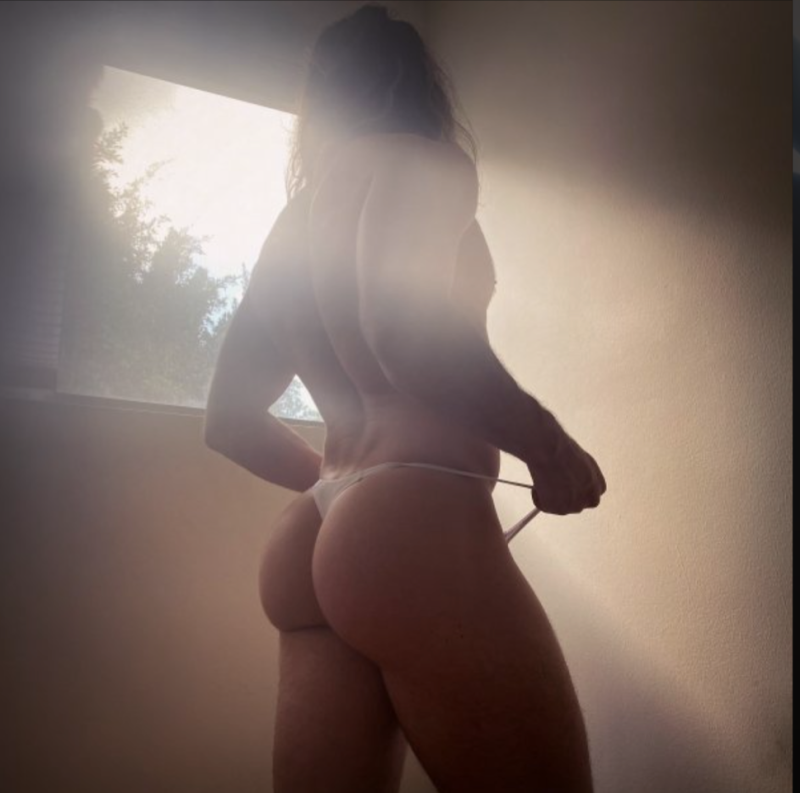 Did I lie? (Image via the X-rated Obscurist Club)

No longer! But only because he moved to L.A. 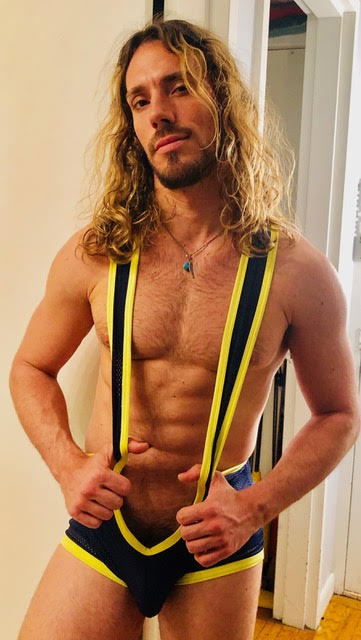 A new snap, in an almost-singlet (Image by Paul Petzy)

De Celis was a fixture

on the NYC scene, but always polite and sweet. His hair and overall look reminded me of the Naked Poet Gavin Geoffrey Dillard, who I saw on the cover of a gay calendar around 1990. I wrote to Dillard and we had a pen-pal thing for a while, but he's off the deep end lately with conspiracy theories. It's harder and harder to find objects of desire without disqualifying non-physical features.

Keep reading for some other Instagram accounts that will totally distract you during your down (or up?) time — and please comment your favorites for my next round-up ...

Corey Collins is a breath of fresh air from Columbus, Ohio, and based in Chicago. I love his hypermasculine frame with unapologetically gay poses. Think of him as a joy toy.

Christian Hogue looks like an 1980s supermodel, and poses like a 2020s supermodel. He's into the ladies, so you won't find a handy OnlyFans or many butt shots, but that face ... !

The ultimate silver-daddy model, Eric Rutherford's account reminds you that beauty is often ... if not eternal, then doggedly long-lasting. He's also the host of The Push with Eric Rutherford, an IG Live show that showcases things beyond his droolworthiness, like gender fluidity, organic storytelling and positivity.

Is it just me, or are some of the sexiest accounts those run by men who do more than just look hot? Karl Kay is an internationally renowned DJ, and his love of music veins its way through his accounts, amid images that also reflect his love of showing off.

Yes, his last name is Savage. Savage, as well as being eye candy, has an eye for candy — he's a professional photographer. Which means more than just owning a ring light. 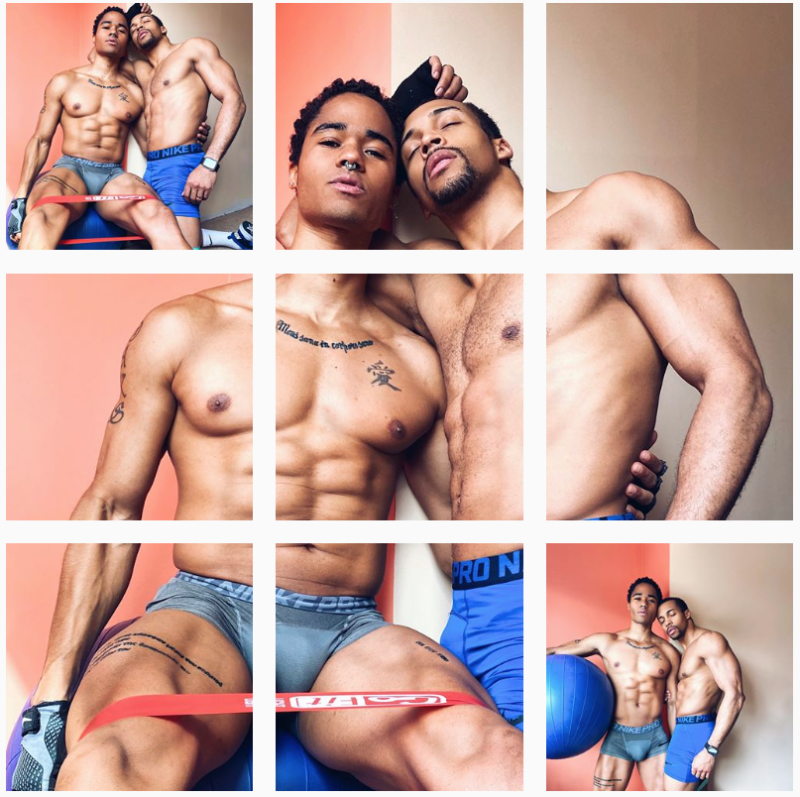 What a pair! (Images via @levimarsman)

This dynamic duo is particularly good at balancing sexy singles and daring doubles. They're just stunning to look at, and have been actively pushing the #stayhome message.

Another of Instagram's liveliest couples, Rick and Griff show off their “very Mary fairy tale,” and show off much more on their OnlyFans.

This bi, married dad has a decidedly more outdoorsy and earthy IG page, one for enemies of grooming and prettifying. Looks like what Bruce Weber dreams every night.

Dusty Lachowicz is a proper model, so even his casual snaps look like fashion, somehow. His account is also raising dollars for NYC's healthcare workers, so that gives you more bang for your bang.

Kaylan Morgan pushes limits, and we need more of that on IG. I would like IG to be superseded by an app that has no limits outside of what is illegal (child pornography). Anything else should be admissible. There will be free-for-all accounts, but there will also be accounts that more accurately reflect the totality of a person's expression; maybe even this one.

Manuel Scheu is a mountaineer and adventurer who is multi-lingual and multi-faceted. His sexy snaps reek of health and fitness first, getting your rocks off second and third.

With just over 5,000 followers so far, think of Jordan Patrick — who is not averse to body hair — as a relatively undiscovered talent. Hop on now and watch his account grow. He (and Mariano and Corey and, and, and ...) should soar past 10,000 at the very least.

Adnan Al Mouselli must have one of IG's most perfect chests, and his posts are more artful and less self-absorbed, allowing you room to become absorbed.