I Wish It Would Never End: Why Saying Goodbye To Books Puts Me In A Bind Comments (0) 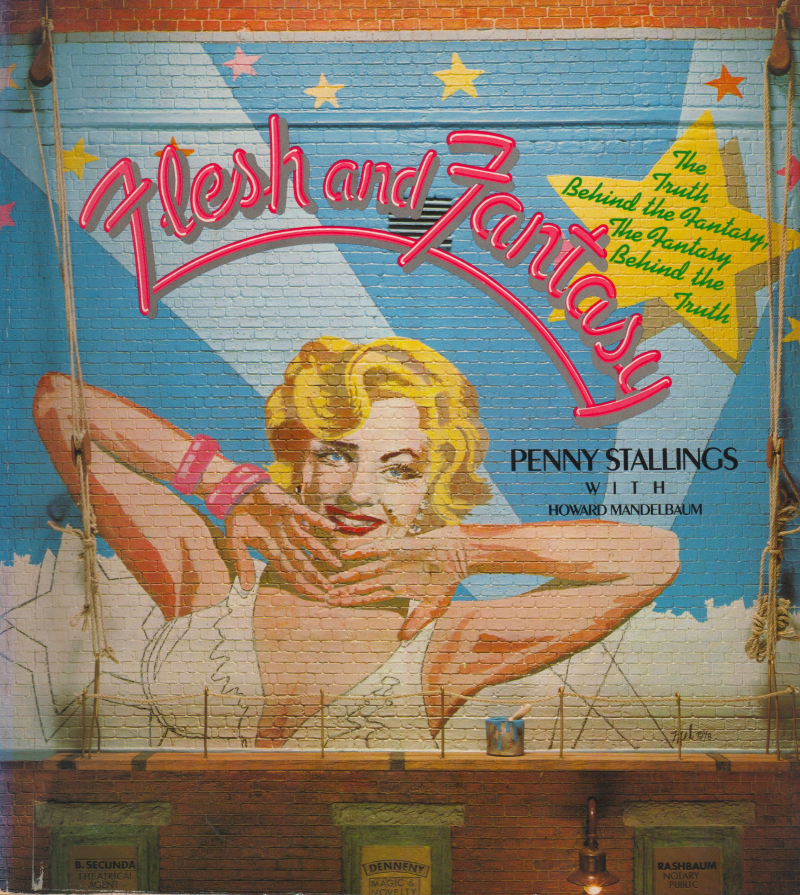 Do judge this book by its cover. (Image via St. Martin's Press)

I have a hard time turning the page on things.

The hardest for me is ephemera, various types of which I collect religiously — beefcake photography and clippings, advertising, Madonna magazines and ... books.

In spite of that, I have found less and less time to read over the years, have perhaps even developed — against my will — an aversion to reading anything too long, like a kid seeing a fascinating-looking YouTube video then clicking away upon realizing the length is 8 minutes-plus. In the past few years, I've read scandalously few books, even though I've tried. Does leaving them, half-read, displayed prominently on the little table by my bed count as reading them?

I received David K. Johnson's Buying Gay free, and while I know — I know — the content would intrigue me, I fall asleep as soon as I dive in, not from the writing or the subject matter, but maybe just from the act of holding something so heavvvyyy, and seeing so many worddds.

I recently started Thomas Tryon's Crowned Heads from 1976 since I find the past to be a blast, but haven't quite gotten through the story I most wanted to read. A short story, it's still rather long.

So now that I find myself in the unenviable position of having to orchestrate a move during a pandemic — my landlord is reclaiming my honest-to-God perfect, ridiculously reasonably priced NYC loft after four years for unimpeachable reasons — why does the fact that I can't, can't, can't keep all my books so deeply disturbing? Why does thinking about getting rid of books leave me paralyzed?

“Everything has a soul.”

That's what my supervisor (and later lifelong friend) Sandra told me at my first job, in that literary agent's crowded office, explaining why we had to very carefully inspect boxes of files that hovered atop the bookshelves in spite of the fact that they contained correspondence so old nobody had referred to it in years.

Well, maybe not everything has a soul. But might every book? Books seem like they exist in a space between things and people, somewhere below animals but above, say, insects. You're more likely to squash a housefly than to throw a book into the garbage, after all. 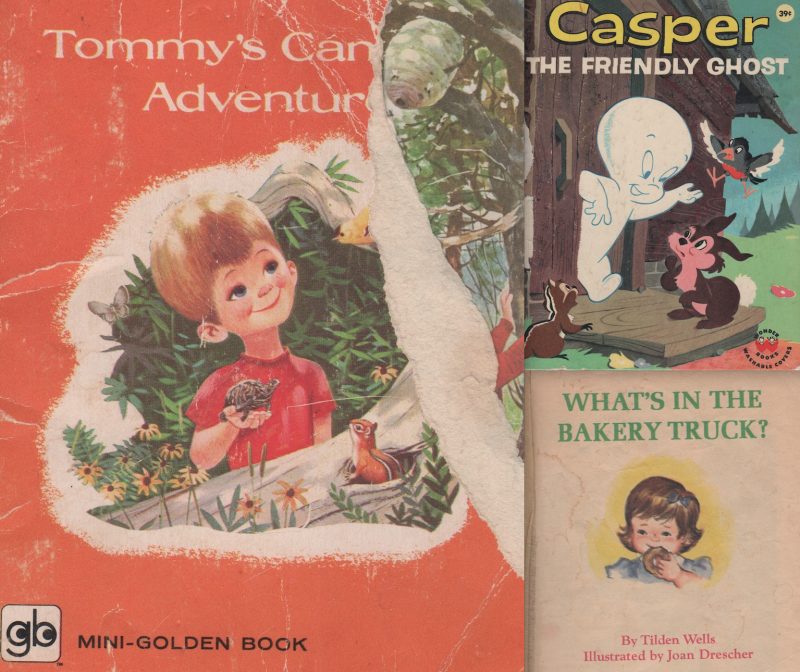 Looking at all the lovely books I have, it makes sense that I would feel reluctant to get rid of — and in a pandemic, it's unlikely we're talking about donating — the expensive coffee-table tomes. After all, even though very few books retain or improve upon their value over time, it's painful to think I dropped $40-$50 on a book, skimmed it, placed it on my shelf, and then eventually tossed it. Also, a coffee-table book is highly decorative. Even if you never read it, it's like a work of art to be discovered by anyone entering your apartment and looking for something to do besides make conversation.

But what about all my reference books? Why are even those, even the ones I have not used in 20 or more years, so hard to expunge? Isn't all the information contained within The All Music Book of Hit Singles, compiled by Dave McAleer, from 1994 available on the Internet by now anyway?

Unsold TV Pilots (1991) by Lee Goldberg makes a stronger case for itself — to find so many obscure pilots detailed in any (other) one place would be a feat. But do I need to crow over TV Turkeys (1987) by Kevin Allman, a whole book of dud series? Can't I just revel in my own memories of Supertrain?

Part of the answer is that regardless of each book's worthiness, taken together, they begin to feel like an archive. That's certainly the case with the many celebrity bios and memoirs I have that I've read once and will never crack again (Garbo, Hepburn, Capote ... Valerie Harper). It's true I won't re-read the life stories of Genet and Lauper and Betty White, but seeing them together not only feels like a small research facility, it begins to create a portrait of, well, me.

Maybe that's why I'm so addicted to lugging these useless piles of pulp with me over the decades. I've always known I have a deep and abiding affection for the books that hit me hard on impact (all of Richard Lamparski's Whatever Became Of ... ? career post-mortems, 1987's The Unabridged Marilyn: Her Life from A to Z by Randall Riese and Neil Hitchens, Chip Kidd's fan-tasmagoric Batman Collected from 1996 — all books I have owned, that influenced me, that were stolen and that I have gone out of my way to re-purchase), but it's possible the books I love most are bestowing a contact value to all the others I've stubbornly decided to keep.

That's definitely the case when it comes to the LGBTQ books I own. The first one I ever bought, The Gay Book of Days (1982) by Martin Greif, I acquired by waltzing into B. Dalton Bookseller in Genesee Valley Mall in Flint, Michigan, around 1986, boldly grabbing it and paying for it with cash earned from my first job as a department-store stockboy, all the while praying that the clerk wouldn't look at me during the transaction. It's great fun as a book, filled with valuable historical information and outrageous gossip, and it instilled in me the belief that fuck it, history had a lot of gay people, it's not wrong to acknowledge that and it's not an insult to wonder whether obviously gay-seeming folks actually were. 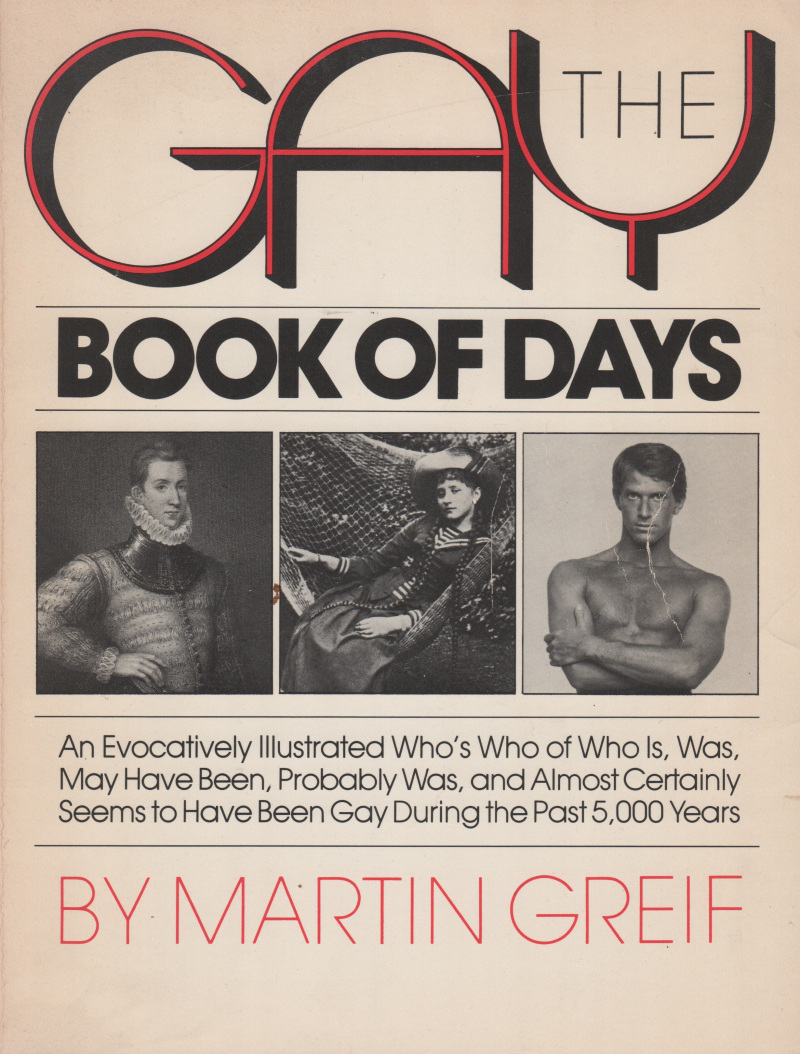 This had blind items that blew my mind, and probably annoyed Dyan Cannon. (Image via Lyle Stuart)

Gay novels have a similar power. A Boy's Own Story, Edmund White's literary tale of cornholing, came out in 1982, just about five years before I did. I bought it around 1988, in the University of Chicago bookstore. As with The Gay Book of Days, buying a book like that was not just to teach myself something new, but was to stand up and be counted, to explicitly express myself via someone else's work of art; it was no random act of commerce. I felt a similar way rescuing a hardcover The Confessions of Danny Slocum (1980) by George Whitmore, a wholly gay novel from the Violet Quill era by a man who'd died of AIDS that I purchased at Housing Works, leading me to believe it had perhaps been in the collection of yet another gay man who'd died of AIDS.

It felt like we were all pages between the same covers.

Knowing I have an attachment to most of my books that goes beyond their practical future use makes getting rid of them in any methodical sort of way all the harder. I can hold up The Marble Quilt (2001) by David Leavitt and reason that I did not enjoy it as much as The Lost Language of Cranes (1986) by David Leavitt, but it seems impossible to separate them from each other, or from myself. Books like Flesh and Fantasy (1978) by Penny Stallings with Howard Mandelbaum I feel a special urge to preserve because its contents — where else can you find a still of Myrna Loy in blackface, the gossip that Marlon Brando turned down A Star Is Born to avoid Judy Garland's tantrums and a snap of an L.A. district attorney employee in Mae West drag between two covers? — are rare and getting rarer in a culture that is less interested in the past than ever. Looking at the books I've acquired, it seems a demonstrable truth that I take the past personally.

So why not my own?

That's why it's going to be hard to reduce the number of books I own, and why my dogs and I might have a little less legroom than we'd hoped when I move — because in order for me to embrace the new, I've got to be able to do it while clinging to the old.