Comments Are Turned Off, And So Am I Comments (0) 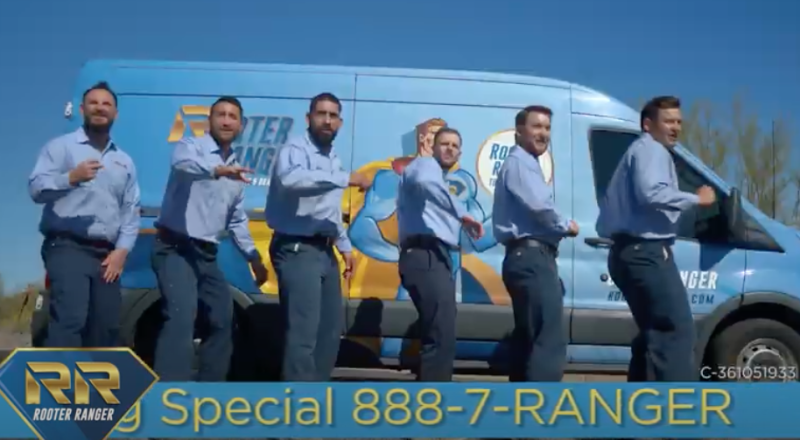 I am a fan of intentionally bad TV ads. I do not believe this is one of them. There is nothing in the description or tone of the ad that suggests the company is in on how awful these poor guys are — and they shouldn't have to be good singers and dancers, because they're clearly actual plumbers!

I would be ... unthrilled ... if this ad popped up all the time on my local news site:

It reminded me immediately of this HEINOUS Carmel Car Service ad that I have seen, oh, about a million times. I especially loathe it because the Asian dude in the white shirt has NO RHYTHM and — in spite of being granted a solo — has no idea what the words of the simple jingle are. And the director was like, “Perfect!”:

Carmel Limo had a much better, more deliciously bad ad based on Sex and the City. What I love about this embarrassingly raunchy ad (who brags about the implication that their invariably gross driver bangs them nightly?) is that the one chick LOVES THE THE-A-TER, and the part where one white lady “ooooh, girllls” another:

Growing up in Michigan, Al Bennett Ford ads are burned into my brain. Son-of-a-preacher Al was a strange duck because he called himself the Dealin' Man, but it really came off as selling himself as a slick hustler. Car dealers are not considered trustworthy paragons of virtue as it is, and Al really played that up in a way that now seems unwise, and yet that made him a local-household name for his $99 down, $99/month promise. As part of his shtick, he would involve his angry wife Yvonne, who would invariably show up to berate him for making such great deals, a kind of Honeymooners vibe. She apparently died long ago, as he so eloquently says here:

A bit Perd Hapley-ish. Man alive, I wish I could find one of his signature spots, but I could only dredge up two that really aren't so memorable (to me).

By the late '80s, Yvonne was only a cartoon:

Here's a pretty boring version, probably post-divorce, when he had moved on to using his mom:

Then there are local ads that try — REAL HARD — to be hip and current, like this rappin' flea market spot:

Here's an example of a local ad so terrible, and so in on the joke. They know Eagle Woman is ridiculous, and the acting is a John Waters-hed moment. Plus, nobody writes that a male eagle is “spurting his eggs” without intention:

No, this is not Christopher Knight of The Brady Bunch fame, this is a tool who made a Star Wars-themed ad to propel him onto his local Board of Education. Enough to make you root for Darth Vader:

There's no way that little girl in the beginning didn't get bullied to death after this: