Klobuchar Emotionally Stands Aside From VP Consideration, Urges Biden To Choose A Woman Of Color Comments (0) 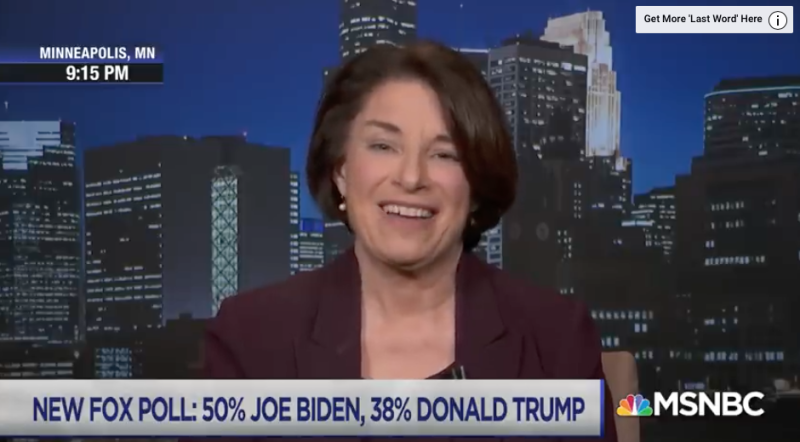 Amy is no Karen. (Image via video still)

Sen. Amy Klobuchar (D-Minnesota) has removed herself from Biden's VP consideration, telling Lawrence O'Donnell she called Biden Wednesday night to urge him to prioritize a woman of color for his ticket.

Without watching her do this, one could say Klobuchar was stepping aside from a process  in which she was already not a top contender anymore, I have to say that watching her deliver her comments, I feel she was being absolutely sincere, and seemed to be on the verge of tears.

It has been said that in spite of many reasons not to pick Klobuchar, Team Biden long favored her, so perhaps her standing aside is more momentous than we really understand.

Amy — from the moment you announced you were running for president in a snowstorm, it wasn't hard to see you had the grit and determination to do anything you set your mind to. You know how to get things done. With your help, we’re going to beat Donald Trump. https://t.co/4kquPZtSV9

Biden has warmly acknowledged Klobuchar's gesture, and this is all no accident. I would now say that Warren has zero chance of being selected, and that it is now Kamala Harris's slot to lose. Val Demings (she's from Florida, which has to make her very competitive with Harris, who is NOT FROM FLORIDA) and, as a dark horse due to her relative inexperience, Stacey Abrams. Those are the only three I can fathom Biden going with.