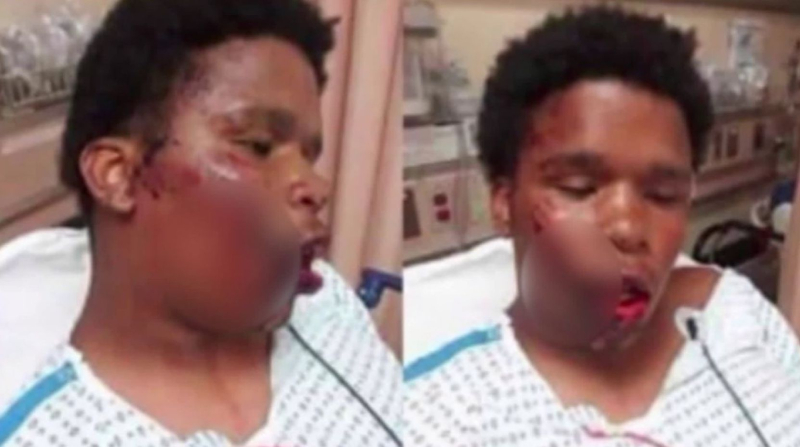 Blurred because his facial injury — he may lose all his teeth — was so gruesome. (Images via WPIX)

Instead of using unrest over systemic racism in the ranks of all police departments, cops seem to have doubled down, using excessive force on peaceful protesters in numerous instances, often brazenly — even when they knew they were being filmed.

The latest clearly abusive incident to surface happened on June 1, when 16-year-old Jahmel Leach was brutally tasered in the face, leg and shoulder by cops in the Bronx, who have accused him of being a part of looting and have charged him with arson.

Mayor Bill de Blasio has called the report troubling, has spoken with Leach's family and is promising answers.

According to police sources, the NYPD alleges the boy was arrested on Fordham Road after he was seen running in and out of a looted T-Mobile store and attempting to set a pile of trash on fire, all amid rampant looting and rioting in the area that night.

Leach's family deny the claims and said the teen was not involved in any acts of violence.

The teens family also claim police arrested him and brought him to the hospital without notifying his mother, despite that he is a minor.

NYC Schools Chancellor Richard Carranza tweeted Wednesday night that he was "horrified" by the incident. "There is no place for violence against our students," Carranza wrote.

"The New York City Department of Education condemns police brutality...We are here for Jahmel and his family, and all our families, staff, and students during this painful time and beyond," he wrote in a series of tweets.

Leach and his family, along with their attorney, are set to speak at a press conference at Thursday at 3:30 p.m. in the Bronx.

A cop allegedly told Jahmel's mom he was sorry he took him down so forcefully, not realizing his young age because he's so tall. Sickening.