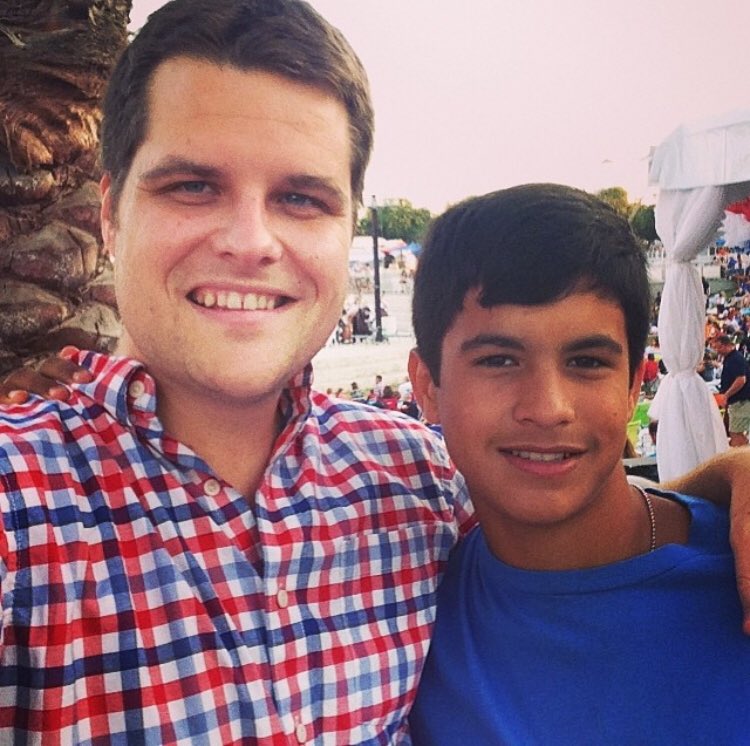 Matt Gaetz with his secret pride and joy. (Image via family photo)

Rep. Matt Gaetz (R-Florida) is a confirmed bachelor, one of the stupidest men in Congress and, apparently, the longtime dad of a Cuban-born son.

Yesterday Gaetz, with a white supremacist rage, thundered at a black colleague in a policing debate, “Who in the hell do you think you are?”

Facing understandable outrage for such a remark, he decided to reveal that he has been raising/living with a Cuban-born son, Nestor, since 2012. Nestor is now 19.

Literally nobody knew this outside his family, apparently, and his sister is now furiously posting family photos that, for whatever reason, Gaetz was ashamed to share over the years.

Actually, we have seen Nestor before, but Gaetz did not call him son, but “helper”:

When did he go from helper to son? . pic.twitter.com/6hBMSx2d7g 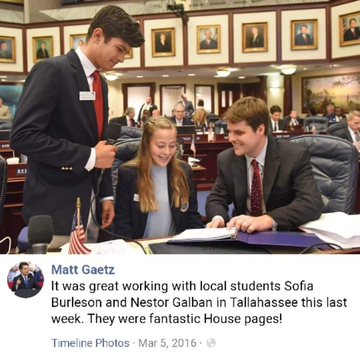 Not in front of her flag! (Image via social media)

People are understandably shocked that Gaetz — who has a DUI record — was able to adopt (?) a 12-year-old boy from another country, and that he chose to keep this arrangement a secret until he felt it was politically expedient to come out of the closet ... as a dad.

Or a father figure.

Related news: Gaetz was LITERALLY THE ONLY PERSON TO VOTE AGAINST A HUMAN TRAFFICKING BILL. Here he is, explaining why he was the only human being in Congress to vote this way ... with his unacknowledged young-adult, live-in son seated behind him in silence. The optics!

I am seeing so many hateful comments about Matt Gaetz & Nestor. When that kid lost his mom, Matt was dating his sister and he stepped up. Plain and simple. He has been an outstanding role model & mentor for Nestor and anyone that served with Matt knows this great kid 🇨🇺🇺🇸 pic.twitter.com/lD96jI54nQ

UPDATE: Jose Felix Diaz (Jesus, all these Latinos who are buds with a virulently anti-immigrant politico) is defending Gaetz, saying that what had happened was Gaetz was dating 12-year-old Nestor's sister when their mom died, so he took him in. What the fuck? Nestor has a sister who was old enough to date 32-year-old Gaetz, but not old enough to care for her nephew, so she pawned him off on her then-current boyfriend?

Nestor, who is understandably indebted to Gaetz, has tweeted his support of his ... dad? Whatever. Trump-supporting Nestor writes:

Matt is the best dad/mentor anyone could ever ask for, he has taught me a lot, and I’m thankful to have him in my life.