citizens — or was it a mysterious white person looking to cause chaos? See inset — set fire to the Atlanta Wendy's at which Rayshard Brooks was fatally shot by a cop Friday. Wendy's workers called the cops on Brooks for sleeping in his car, blocking the drive-thru lane. Cops for some reason tried to Tase him, he wrestled it away and ran, then he was shot. The cop who shot him was fired. Atlanta's Mayor Keisha Lance Bottoms criticized the fired cop, saying it was not a justified use of deadly force.

An officer abruptly stops so the protestor walking behind him bumps into the cop.

Then the man is violently arrested.

Bystanders: “they kneeled on his neck & had about 6 officers holding him down.”pic.twitter.com/uNK5DOaFRo

TWITTER: Long Island pigs deliberately cook up a reason to throw a peaceful protester to the ground and rough him up. On camera.

NYP: Michael DeBonis, an ex-detective for the NYPD, posted on social media of his old employers:

He's got that right! His post detailed the ways in which the NYPD failed, and copped (so to speak) to his own hypocrisy for not speaking up at the time Garner died. He deleted his post after it was noticed by the media.

Robert Fuller (L) died by hanging a year after these teachers, in an unrelated incident, made light of lynching. (Images via KCAL)

KCAL: Robert Fuller, a 24-year-old black man, was found dead Wednesday in Palmdale, California. He was hanging from a tree across from City Hall. City officials have said they think it was suicide ... but there were no working cameras near the site, which, again, was across from City Hall. FLASHBACK — Not exactly the poster children for selfless, hard-working education professionals — in 2019, four teachers and the principal at Summerwind Elementary in Palmdale, California, were put on leave after they joyfully posed with a noose found on school grounds and then glibly shared the photo on social media. The photo was taken by the principal! All five are white women. Obviously, the teachers are not connected to Fuller's death, but it is an eerie peek into the mentality of at least some of Palmdale's white citizens. 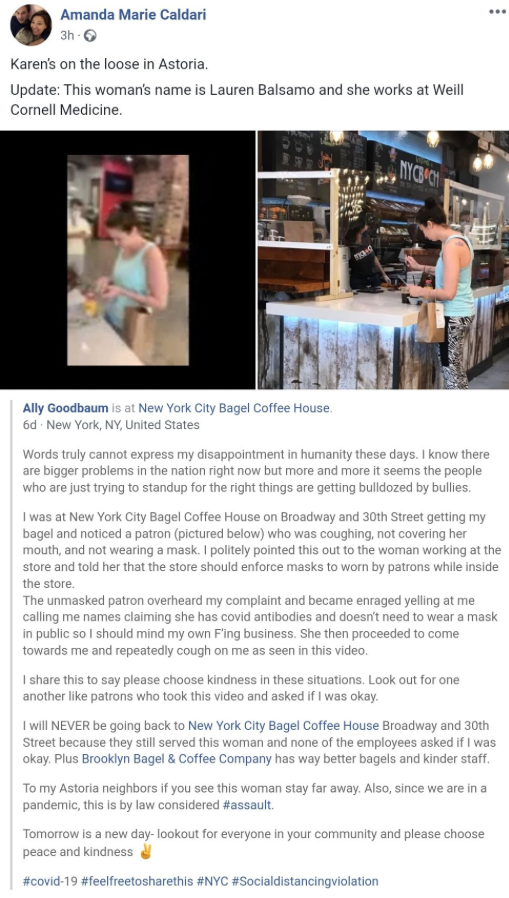 She was right, the bagel place and the cougher were wrong. Period. (Image via FB)

TWITTER: A Karen who was mad she was called out for not wearing a mask in an establishment that required them was caught on video — and her face, when she realizes she was filmed coughing on people, is everything:

Called out for not wearing a mask...

So she coughs on somebody, not realizing she is being recorded.

This took place at the New York City Bagel Coffee House in Astoria on June 11. The other customer complained about Karen because she was maskless AND COUGHING. Oh, and she is Lauren Balsamo (on FB as Lauren Ashley), who until January was an assistant research coordinator at Weill Cornell Medicine. If anyone deserves to lose their job for going maskless and coughing on someone, it's someone who works at a medical facility, but it's unclear where this clown currently works. 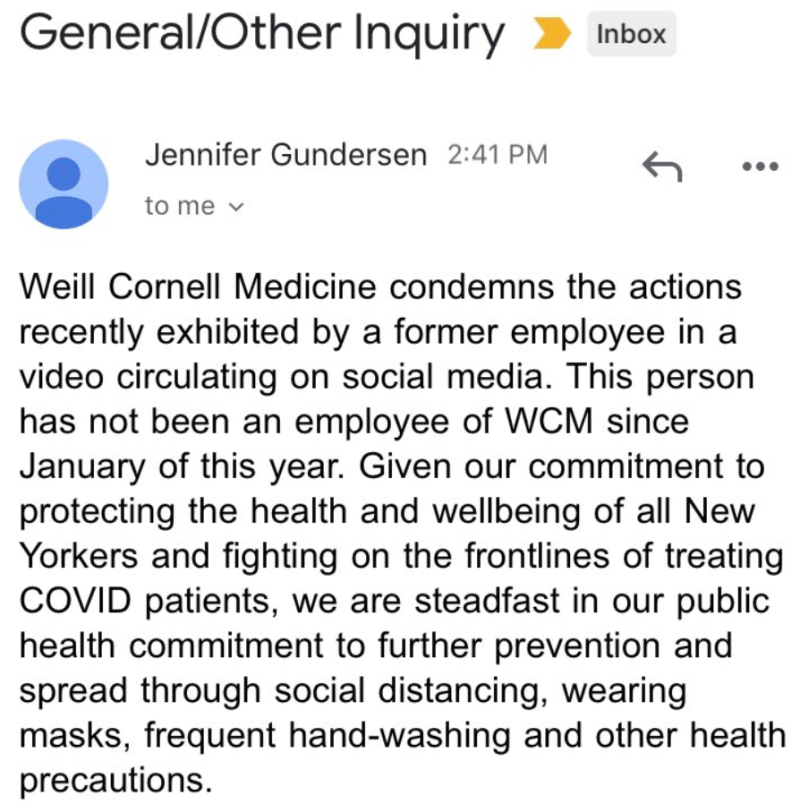 KENNETH IN THE (212): In Belgrade this weekend, a massive tennis match — mask-free, social distancing-free. 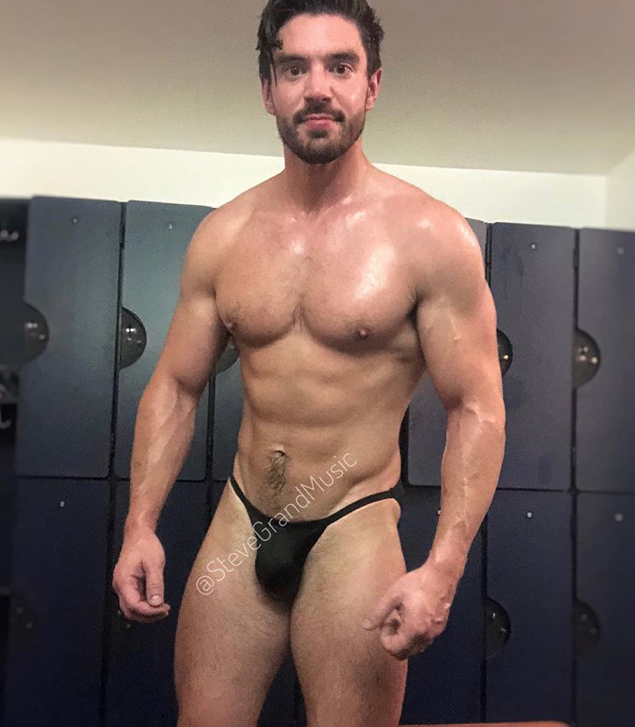 TWITTER: Thin-skinned, thick-everything-elsed Trump took time out from running the country into the ground to respond to that damning video showing him barely able to traverse a long, low ramp. He says it was slippery (in that heat? How?) and brags that he ran down the final part of it due to momentum. Odd time for him to embrace science. More like dementum. Or: #JOEmentum. 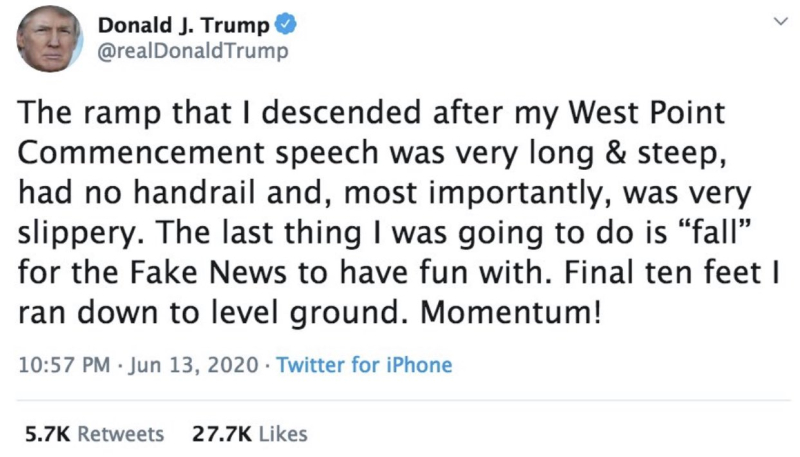 And why is fall in quotes? (Image via Twitter)

HUFF POST: I had some douche on Twitter harassing me because I said tear gas was used in clearing the area for Trump's Bible photo op. He was using a mincing of words. Now, there is no mincing — tear gas was used.