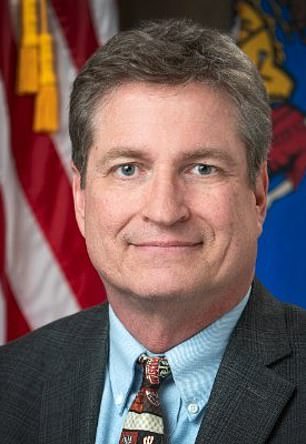 On Wednesday, out gay Democratic state Sen. Tim Carpenter of Wisconsin was assaulted by eight to 10 people protesting on a public street who objected to him filming the protest.

Since the assault, which happened on his way to the Wisconsin Capitol building, he says he hasn't slept.

Thursday night, during a vile town hall on Fox News, Trump said of the assault that Carpenter, “who happened to be gay,” was probably at the protest cheering people on:

"The person they beat up was a Democrat who happened to be gay" -- Trump brings up a Wisconsin politician's sexual orientation for no apparent reason at all pic.twitter.com/qCVU4eyOtr

Carpenter's sexual orientation had zero to do with the assault, and he absolutely was not there supporting any protesting, let alone looting or violence. In an interview with The Milwaukee Journal Sentinel, Carpenter says:

It seems like there's a war going on — one on the far left that resorts to violence ... and then you have the president of the United States coming to Wisconsin trying to further divide people and lie about what happened.

He said of the out-of-nowhere attack:

I don't know what happened. All I did was stop and take a picture ... and the next thing I'm getting five-six punches, getting kicked in the head.

In the video Carpenter took, it is clear he was merely filming a public protest. For no reason, two protesters bum-rush him and grab his camera. It was after this that he was punched and kicked, leaving him with extensive injuries. Carpenter said his attackers only stopped when he IDed himself as a state senator “on their side.”

I took this pic- it got me assaulted & beat up. Punched/kicked in the head, neck, ribs. Maybe concussion, socked in left eye is little blurry, sore neck & ribs. 8-10 people attacked me. Innocent people are going to get killed. Capitol locked- stuck in office.Stop violence nowPlz! pic.twitter.com/Zw2hdfYG66

Yes, but the rest of us got this video of a fat girl waddling over to you!

But Carpenter wasn't having it, replying:

My dear sweet Annie Coulter, I’m sorry I didn’t recognize that it was you charging me at the MSN riot. I guess that happens when you become irrelevant. XO

Ultimately, Carpenter is in a tough spot, because he was beaten senseless for no reason and by his own side. But he still had the clarity of mind to tweet that Trump is the greater evil, writing:

Don’t know what hurts worst being punched,kicked, beaten up or hurt by Trump’s LIES, desperate attempts to further polarize the USA just to get re-elected. A concussion,nose fracture,bruised eye,neck& ribs heal w/time, but blatant, hurtful lies live on forever. Stop it DJT! 😢 🤥

I heard what Trump said at Fox’s Town Hall. I was at the MSN riot- they’re tapes of what took place.Don’t know which is more brutal the beating I took or the lies and beating of the truth by Trump. My body will heal in time but DJT’s LIES will live forever. He’s sacred/desperate

Finally, I will never fall prey to bothsidesism, but one fact both sides do need to grasp is that if you are in public, PEOPLE ARE ALLOWED TO TAKE YOUR PICTURE. Period.