Gay White Racist Caught On Video Screaming The N-Word In NYC: WHO. IS. HE?! Comments (0) 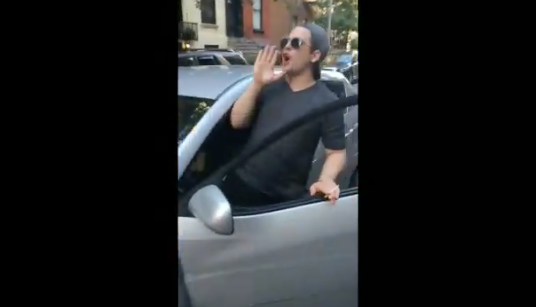 Who is she? Who was she? Who does she hope to be? (Image via video still)

A gay white racist was upset about traffic in NYC (E. 85th St., between 1st and York Ave.) at approximately 6:00 p.m. Saturday, July 18, 2020, so took to screaming at someone in front of him to get out of the road. According to one witness, he screamed the N-word for three minutes, and according to the video below, he screamed it at least once.

Next, when he discovered he was being recorded, he acted amused and claimed he would get more fans (this queen is — I mean was — an entertainer?), then told the guy recording him he looks gay (as an insult) and threatened to beat him up. Getting out of the car, the racist then does a fast grab for the guy's cell phone and smashes it on the ground.

Gays of the TriState area (the car's license may be registered to a business in Connecticut), let's ID this guy and ruin his fuckin' life. Yeah, see, cancel culture is not the problem. The problem is racists ...

Racist on the Upper East Side. Find out who this racist person is and let us hold them accountable. This and any other act of racism will NOT be tolerated.

As City Council Member of #District45, I will be holding these racists accountable.https://t.co/41nCXEP0Fq pic.twitter.com/ariaOSFGF4