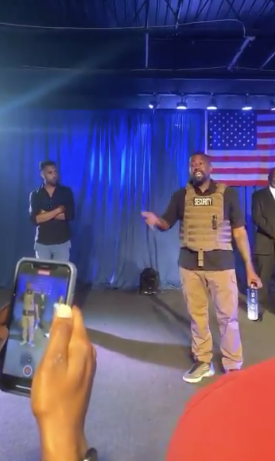 “Running on the populist message of “fuck you, Harriet Tubman” (Image via video still)

The people lifting this man up are garbage. Kanye West, at a chaotic South Carolina campaign event (in a pandemic) had an obvious bipolar episode, besmirching Harriet Tubman (who he says never freed slaves — just freed them to work for different white people) and bursting into tears over the topic of abortion, claiming his father wanted to abort him and his mother saved my life!

The people supporting this are garbage ...

Oh my God, what is happening pic.twitter.com/4wWgT6tw8O

Kanye West at his “campaign rally” in South Carolina: “Harriet Tubman never actually freed the slaves, she just had them work for other white people.”

Loud groans from the audience, “come on man” can be heard pic.twitter.com/Q9g92UvZ27

It ended with a whimper: