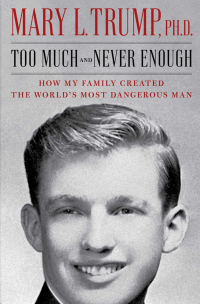 Mary Trump, Donald Trump's niece whose Too Much and Never Enough: How My Family Created the World's Most Dangerous Man sold a record-breaking 950,000 copies its first day, recalls in the book how hearing Trump's mom utter a gay slur helped her decide not to come out as a lesbian to her family.

The author also stresses that Trump’s prejudices mirrored his parents’. Both Trump and his father were sued by Richard Nixon’s justice department, for housing discrimination. Mary Trump also contends that Fred Sr regarded “Jew” as a verb and was “scandalized” when “the first Italian American family moved into the neighborhood.” Trump’s mother, she writes, derided Elton John as a “little faggot”. The author was in a same-sex relationship at the time.

In context, Trump's mother was venting regarding the 1999 funeral of Princess Diana, and reportedly said:

In a WaPo interview, Mary Trump asserted that slurs were commonplace in the Trump family:

Growing up, it was sort of normal to hear them use the N-word or use anti-Semitic expressions. Homophobia was never an issue because nobody ever talked about gay people ...

Apparently, the first time she heard gay people referenced was when Trump's mother, a total nothing, derided Elton John, a total something.

Mary Trump has also affirmed to Rachel Maddow that Donald's prejudices led him to use anti-Semitic slurs and the N-word:

Her response is so matter-of-fact it shows how obvious the question is — it's almost like the question is ridiculous. And with no criticism intended toward Maddow, it is a ridiculous question in 2020; Donald Trump has been a lifelong apologetic racist and white supremacist. This should have been obvious from the Year One.

Buy the book. And vote.