All you need is Love, Victor. (GIF via GIPHY)

INDIEWIRE: Twenty-year-old Michael Cimino, currently in the star-making lead role on Love, Victor, admits he was coached not to play gay, and for all the same old, tired reasons:

OMG.BLOG!: One of my favorite queer blogs is behind a ($2-a-month) paywall. I may try something like that. Makes sense, no? So cheap.

CNN: Mary Kay Letourneau, perhaps one of the country's most famous and famously excused rapists since Luke on General Hospital, has died at 58 of colon cancer.

GUARDIAN: Civil rights groups finally able to meet with Mark Zuckerberg over Facebook's ushering in of populist hate have expressed disappointment that the meeting went poorly.

KENNETH IN THE (212): A parody of Fire Island COVIDIOT Corey Hannon that's so dry it's almost ... is this real? Corey?! 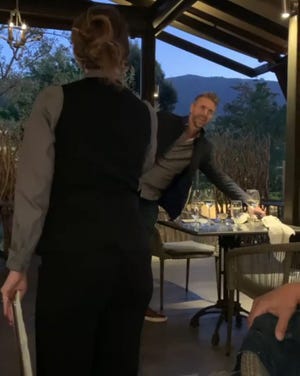 Lofthouse's behavior was menacing and out of nowhere. (Image via Instagram @jordanlizchan)

USA TODAY: Insane! Can't keep up with all the bad behavior. Cancel culture is NOT the problem. This tech CEO went on a vicious racist rant because some Asian patrons had the gall to sing happy birthday at a restaurant. His actions were so vile the server flipped out on him and autonomously banned him from life. His name is Michael Lofthouse, and he apparently has an Asian sister-in-law and vacations in Bali:

Here is how he replied when confronted on social media:

After making perfectly clear how he feels about Asians and about his own place in the world, Lofthouse later apologized in a statement to ABC7:

My behavior in the video is appalling. This was clearly a moment where I lost control and made incredibly hurtful and divisive comments. I would like to deeply apologize to the Chan family. I can only imagine the stress and pain they feel. I was taught to respect people of all races, and I will take the time to reflect on my actions and work to better understand the inequality that so many of those around me face every day.

I mean, really? LOL. You're all so upset about cancel culture — are people supposed to accept hollow apologies that are ONLY MADE upon threat of so-called cancellation?

PEOPLE: Tennessean Justin Timberlake is down with Confederate statue removal.