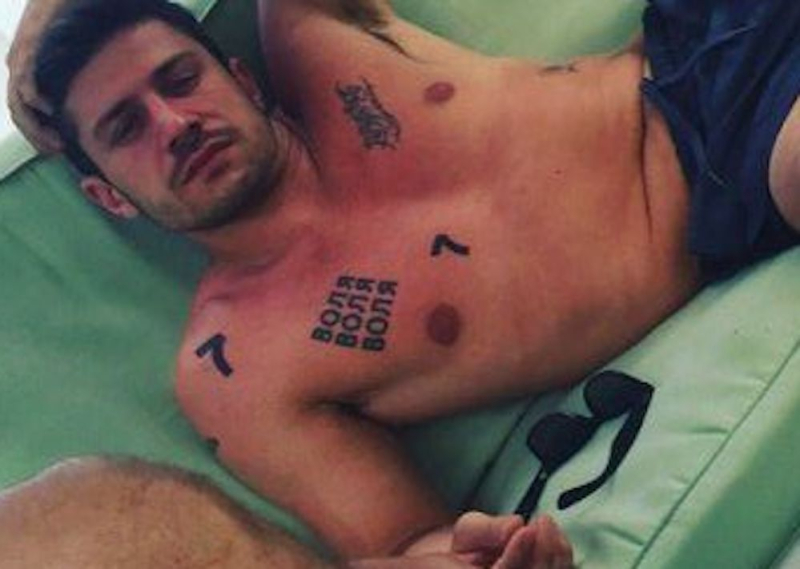 OMG.BLOG! (WORK UNFRIENDLY): Actor Juan Manuel Martino whips it out, whips some up.

JFK Jr. will just die when he hears this! (Image via Twitter)

HUFF POST: Three cheers for Twitter — the platform has ousted thousands of accounts in an effort to purge itself of QAnon conspiracy theorists.

NYT: A Michigan teen has been locked up in a juvenile detention facility since May simply for skipping her online homework. Think of all the people who have skated for breaking actual laws, serious stuff — Roger Stone, anyone? — and this Black teen is held for not doing homework. Meanwhile, her case came before a judge Monday ... and Judge Mary Ellen Brennan of Oakland County Circuit Court rules that because doing her homework is one of the terms of her probation and that she is a threat to her mother. Hm.

POLITICO: Brace yourself, but cherry-poppin' daddy Rep. Matt Gaetz (R-Florida) looks to have spent his way into a buncha ethics violations.

THE HILL: Twelve-term Republican congressman Rep. Steve Chabot of Ohio is on the verge of losing his seat, according to movement indicated in a new poll that shows his Democratic challenger, Kate Schroder, within 2 points of Chabot among registered voters.

WAPO: DHS has authorized personnel to collect info on protesters it claims are a threat to monuments, but:

Since its inception, DHS has played a limited role in protecting revered American symbols such as the Gateway Arch in St. Louis and the Statue of Liberty and always acts against terrorist attacks, not protests by American citizens, said Paul Rosenzweig, a senior policy official at the department during the George W. Bush administration.

The new guidance is “a complete misapplication of existing authorities to benefit the president,” said Rosenzweig, now a senior fellow at R Street, a think tank. “Trump is morphing DHS into his private little rogue, secret army.”

Literally EVERYTHING Trump and those like him have accused the left of are things they have done, are doing or are signaling that they intend to do.

NBC PHILADELPHIA: Dr. Rachel Levine, Pennsylvania's highly regarded health secretary, who is trans, was mocked in a dunking both at the Bloomsburg Fair in her state. A man, identified as Main Township fire chief David Broadt, dressed as Levine. He claimed he was trying to look like Marilyn Monroe, but when called out, he seemed to admit what he was really up to, arguing it “wasn't done to disrespect her.”

THE LINCOLN PROJECT: Jesus, I'm glad these Republicans are actually on our side this cycle:

***NEW VIDEO*** 🎶Gee, Anthony Fauci, their strategy sucks/ They slander all the experts and promote all the schmucks🎶 🤦🏻‍♂️💘🌆🙏🏻😷

BOSGUY: When the thighs have separate zip codes.

CNN: Nancy Pelosi is correcting referring to COVID-19 as the Trump Virus:

House Speaker Pelosi reacts to Pres. Trump embracing masks: “If he had said months ago, ‘Let’s wear a mask, let’s socially distance’ instead of having rallies…then more people would have followed his lead…I think a good deal of what we have suffered is clearly the Trump virus.” pic.twitter.com/mGL1VvxQfQ