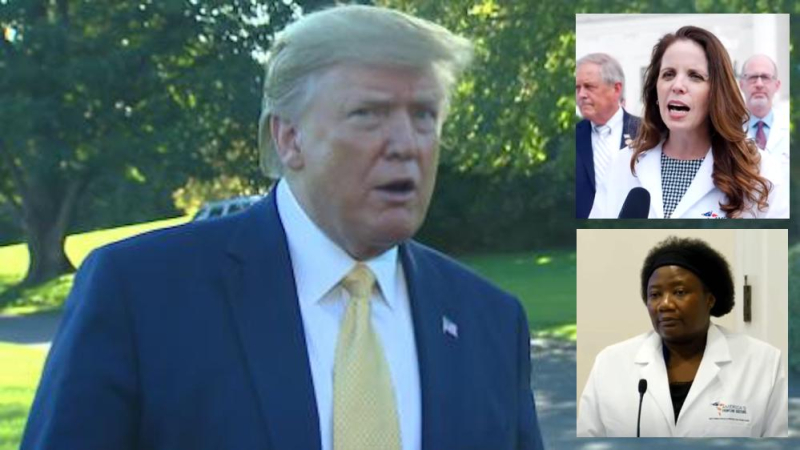 Overnight, Trump went on a tweeting rampage, and — most troubling — he retweeted and endorsed the conspiracy theories of quack Dr. Simone Gold, who believes all you need to treat COVID-19 are hydroxychloroquine, zinc and Zithromax. Her methodology has been totally discredited, but it suits Trump to embrace her so he can claim that the COVID-19 disaster is being enhanced artificially to hurt him in November.

Via Newsweek on hydroxychloroquine:

There is mixed evidence about the effectiveness of hydroxychloroquine in treating COVID-19 and studies are ongoing. Most have so far shown it offers little or no benefit, though some suggest it could be beneficial if used early and in certain circumstances. Concerns have also been raised over hydroxychloroquine's safety by the Food and Drug Administration (FDA) and the World Health Organization (WHO).

Hardly a ringing endorsement, and hardly the type of drug a sitting POTUS should (1) endorse or (2) use as a political tool

Right on time, a misspelled hashtag for hydroxychloroquine trended on Twitter — and by right on time, I mean 9 a.m. Russian time.

Oh look, #hydrochloroquineWorks is trending and all the posts are from exactly 4 hours ago.

These crazed doctors have formed a propaganda group, dubbing themselves America's Frontline Doctors, and the poison they're pushing is so out of the mainstream that Twitter and Facebook have stripped much of it from their platforms; Donald Trump Jr. has been partially banned on Twitter for sharing the disinformation, and it was even stripped from Trump's feed.

One of the doctors Trump is retweeting is Houston-based Dr. Stella Immanuel, who is an anti-masker and pediatrician and, um, minister who believes:

√ any upcoming COVID-19 vaccine is meant to make people irreligious

√ via Daily Beast: common ailments like cysts and impotence are due to sex with spirit husbands and wives and demon sperm

Frighteningly, this clearly insane woman — who runs her so-called medical practice from a strip mall — racked up over 10 million views of her quackery, and has been embraced by the leader of the free world as an expert.