Typhoid Marrrry: Fire Island Partygoer Had COVID-19, Knew It, Went Anyway, Hopes We All Get It Comments (0) 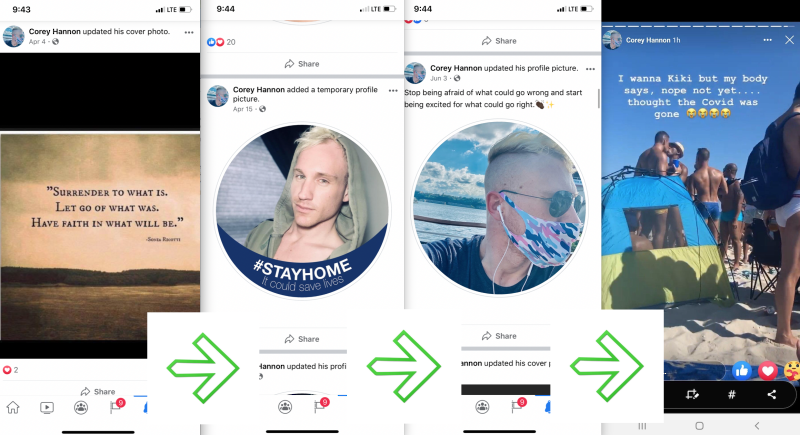 Did he have to be a (former) flight attendant?

Poor flight attendant Gaëtan Dugas was smeared as the Patient Zero of HIV/AIDS, even though later research showed he was no such thing, but Instagram “#foreverhotmess” Corey Hannon is aggressively campaigning for the title of COVID-19 Patient Zero ... of Fire Island, anyway.

Hannon's Facebook page (I have 12 friends in common with him) is a cautionary tale, showing his transformation from philosophical to determined to floundering to perched on the beach in the middle of a kiki (gay men — grow up, you're not competing on RDR, it's just a party) with a full-blown case of COVID-19.

Hannon shocked at least some of his followers by announcing on June 30 that he had decided (or his body had) that he was “done with COVID-19” ... just seven days in. We all know that is not how it works, and that a much longer period of quarantine is necessary, not to mention the well-documented and well-reported fact that the virus sometimes ebbs and flows.

This Guy Is At Least as Gross — CLICK HERE

His response to feeling well after a week? He jumped into body glitter, booty shorts and new Speedos and headed to Fire Island. That was July 3. On July 4, he was already posting his inevitable relapse:

Fuck you Miss Rona. I thought I was cured

(Again, you're a gay man, you're not in Paris Is Burning — it's the coronavirus, it's COVID-19, it's not Miss Rona. Did HIV/AIDS have a cute drag name?)

I miss when gay men were smarter. (Image via Instagram Stories)

By then, it was too late — Hannon had hopped on the ferry (surrounded by others ... thankfully, with masks at least) and had already been immersed in a sea of bodies (thanklessly, without masks or social distancing or brain cells).

Called out forcefully on social media by several people, Hannon's response was to post an Instagram Live video in which he said everyone knew he had been sick anyway and that he hopes all us trolls get COVID-19.

Don't be the person who has COVID-19 for a week, feels better, then goes to Fire Island to party ... and wishes others get it when called out. pic.twitter.com/8nyOFfbpdB

Corey, we are not trolls. We are not Kanye announcing a presidential run. We are worried, not so much about you — you're not worth it, as your wish that others get sick reveals — but about all the people you have come into contact with, and will come into contact with. They do not all know you are infectious, and no, you saying you have a doctor doesn't make a difference, because he or she would never in a million years be okay with you being out of your fucking apartment.

This is a good example of why all the gay man griping that people need to stop being judgmental need to shut the fuck up. Judgment is vastly underrated. It's a pandemic. People are getting sick, some very sick, and some are even dying. The economy is in a shambles. We are all stuck at or close to home. People have lost work and their businesses. People have been unable to do some of the things in life that give them the simplest joys, and others have been unable to be close to sick or dying friends and family.