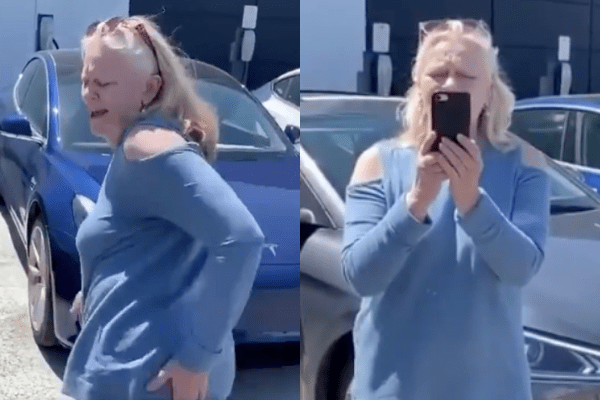 We'll pass on that ass. (Images via video still)

TOWLEROAD: A parking dispute turned into another example of Karens Gone Wild, with an as-yet-unmasked, unmasked woman flipping out and calling her foes punks who, um, hook up on Grindr:

You’re disgusting and I’m so sick of these young people who think they’re all that. Here you go, sweetheart, let’s test you. My goodness, nothing better to do with your time, because this is what your generation does. You go on Grindr and do hookups. You show every part of your body, and you have no self-respect. Oh my goodness, none whatsoever.

She's ... a new one. Can't wait to see what her scintillating video will have to say.

TRUE CRIME DAILY: Teri Hill, 54, of McHenry, Illinois, has been arrested and charged with battery after a dispute over her refusal to wear a mask into Home Depot — during which she proclaimed on video that she believes in white power — turned violent.

TWITTER: Look at this human garbage. This is who Trump voters are. They'll benefit the most, way more than I will, from a President Biden, but they're too ignorant to realize it:

Karen: "We Don't Cover Our Face In America! They Don't Control Us!"
"Trump 2020, baby" - says Karen! And then she started spewing crap about Antifa and Black Lives Matter. pic.twitter.com/8eJ20HzHDO

WXYZ: Described as a “metro Detroit couple” (what a lovely descriptor), the Wuestenbergs are claiming that Jill — who looked utterly insane as she brandished a gun at the family she was fighting with at a Chipotle — merely acted in self-defense. I. Do. Not. Believe. A. Word. Of. This. This is a really unfortunate example of a white lady's croc tears being used to justify what almost became a murder:

YOUTUBE: More white people who are human garbage — tipsy white broads stalking around at Wynn in Las Vegas and screaming about their rights for having to wear a mask in the casino. Idiots: