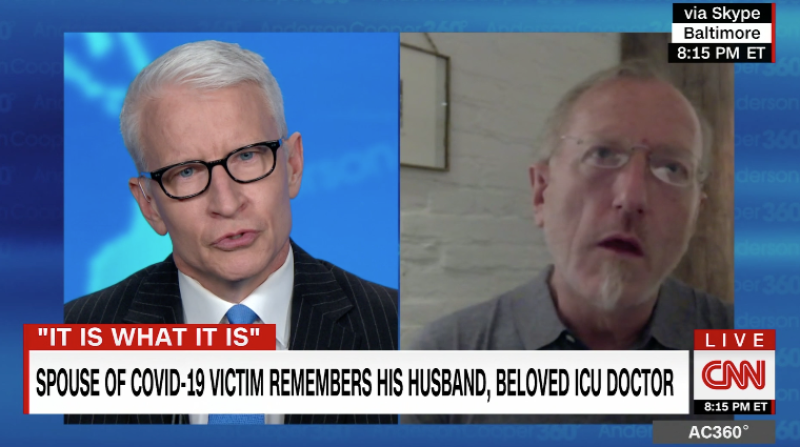 CNN: The surviving husband of a gay ICU doc who died of COVID-19 recounts emotionally removing his protective gear as the man died. (The husband already also had COVID-19.) Even tough Anderson Cooper gets choked up speaking with this grieving widower.

ABC7: Terri Thomas has been exposed as the woman who broke a fellow shopper's leg in a Hackensack, New Jersey, Staples recently, all because the other shopper — who is recovering from a liver transplant — had asked Thomas to pull up her mask. Thomas threw the feeble woman the the ground after snatching away her cane, then flipped her hair and stomped away. She should get years in prison for this.

TOWLEROAD: Lilly Wachowski reveals that The Matrix is a trans allegory.

NBC NEWS: Trump ludicrously claims Florida's vote-by-mail program is A-okay, but other states are participating in a scam for the exact same method of voting. He's only against it in the case of states run by Democratic governors.

WAPO: Meanwhile, most recent cases of voter fraud involve Republicans, including Kansas freshman Rep. Steve Watkins, who was shown to have voted illegally and to have then tried to obstruct the investigation into his malfeasance. He just lost his primary.

TWITTER: Dua Lipa has unveiled the single art of her upcoming “Levitating” remix by The Blessed Madonna feat. both Madonna and Missy Elliott, plus reveals that she's actually dropping a remix EP — and that Mark Ronson and Gwen Stefani are on board. I think the cover art looks like bad fan art and I think it's ridiculous to use a Madame X-era image of Madonna, but I am told this isn't shitty Photoshop, but actually a Hugo Comte photograph of a group of cardboard cut-outs, a concession to the pandemic. Mix out August 14, remix album out August 21.

NYMAG: Republican operatives are aiding the mentally ill Kanye West (who is currently off on a vacay with his wife) in getting on as many state ballots as possible, clearly hoping he will damage Biden. It's not gonna happen, but it's still craven. Lane Ruhland, the Wisconsin lawyer who filed to get West on the ballot in that state repped Trump ONE WEEK BEFORE. So it's clearly dirty tricks time. I hope the Dems will challenge every signature, because you know it's rife with fraud. Still, he will not have an impact — nobody who would have voted for Biden is going to opt to vote for Kanye. Only completely disaffected, typical non-voters and “blow it all up” voters will vote for him.

YOUTUBE: You know how to wink, don't ya? Just put your lids together and

TRUE CRIME DAILY: These two cops on Myrtle Beach, South Carolina, literally cuffed a woman for wearing a thong bikini and had the balls to claim she was breaking the city's law against public “nudity.” They took exception to her “butt-tocks.” What's amazing is that the woman detained knew one of the cops, whose ex-fiancée pierced her nipples! Every one of the cops took the stance that a thong is illegal. (Image via video still)