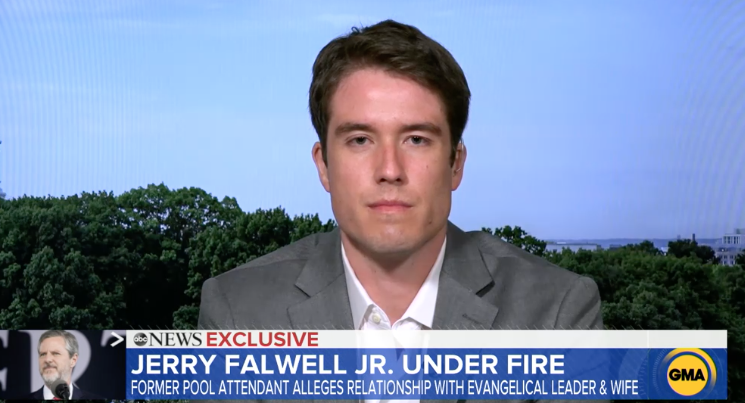 Granda did not say that there are no photos ... (Image via video still)

Giancarlo Granda, the former poolboy who went into business with Jerry Falwell Jr. and his wife Becki after he says he entered into a swingers-style sexual tryst with the couple, is speaking out about his recent allegations, telling Good Morning America of Falwell's denial that he liked to watch Granda have sex with Becki:

Jerry's lying. That was his game plan from the beginning, to just throw her under the bus ... He was aware from day one of our relationship, and he did, in fact, watch.

Granda says he was 20 when Becki, who he says seemed drunk, began flirting with him while he was working at a hotel. She made it clear that in order to sleep with her, he had to let her husband watch. She also mentioned that the Falwells had gone to a Miami swinger club but hadn't liked it.

His description of the sexual encounters is entirely credible, and he implies that Falwell masturbated on the bed while Granda had sex with his wife.

Granda describes the couple as vultures, going into details about how they lured him into a situation in which he was beholden to them.

As a final thought, Becki Falwell — freshly accused of blowing her young son's 22-year-old friend out of nowhere — told Lara Trump in an interview:

We are so proud of our students here at Liberty, and it's just such an honor to serve alongside them.