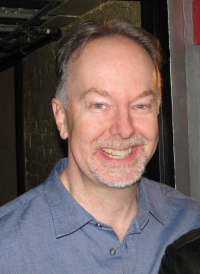 I was lucky enough to have met actor Gary Cowling a few times, including at the premiere of the last season of Sebastian La Cause's series Hustling in 2014. He was an impishly fun and funny man, a delightful actor, and always warm and ingratiating.

I'm sorry to report that Gary died yesterday, August 17, at 58. No cause of death is listed in his obituary, but his friends are expressing shock on social media, so it does not appear to have been a long illness.

Gary, born November 4, 1961, in Newport News, Virginia, was an experiences stage actor, both in and out of New York City.

His obit includes these sweet — and practical! — words:

Gary Cowling was a true gentleman whom countless people considered their dear friend. He had a laugh that flooded your heart, a voice that was great from the next room and a dance step that defied description.

Those privileged to know him understand that he is in a place where there is no type casting, so he can play whoever he wants… and he will be hosting The Gaggle for Any Party Worth Having Forever…just join him when it feels right. Karen, bring the accordion. Nancy, make something chocolate.

A memorial celebration of Gary will be announced soon. Memorial donations may be sent to The Theatre Department of The College of William & Mary, impact.wm.edu/theatre and gmhc.org/donate. And He Wants You To Vote! #GoYankees