ABOVE: Spotted, in the wild.

BELOW: Keep reading for the hardest question ever, what Congress may do about Trump's election fraud, Trump's brother dies (missed it by that much) and more ...

I can't begin to answer this question ... (Image via BoyCulture.com)

DAILY MAIL: Olivia Munn thinks one of her exes was secretly gay. She, uh, dated Aaron Rodgers, for one.

THE WEST AUSTRALIAN: New U.S. indictments against Assange may delay progress on his hearing to consider a new extradition request.

NBC NEW YORK: The NYPD are trash. T-R-A-S-H. Newest proof: Right-wing loon Pat Lynch, who somehow runs the NYPD Union, appeared (maskless) at an event at Trump's New Jersey golf course (guess corruption isn't a major priority of the NYPD) to endorse Trump for a second term. T-R-A-S-H. I live across the street from a station, and the bums stand around all day maskless. A guy was completely naked and pooping at 42nd and 10th and a woman with a baby carriage ran the half a block to the station to point it out. I witnessed the cops all shrugging. They want people to suffer quality-of-life issues so they can blame it on Democrats and get them out of office. I can't wait for a Democratic wave in 80ish days, and all the reforms in the police force that will inevitably follow.

RAW STORY: How Trump has exploited the U.S. legal system in order to advance “true fascism.” 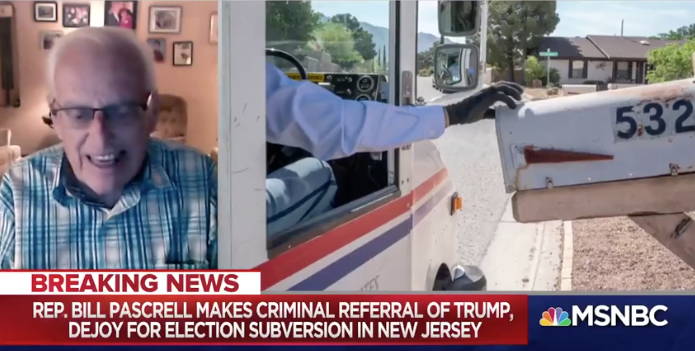 CNN: Pelosi may bring the U.S. House back into session this week over USPS issues. Rep. Bill Pascrell (D-New Jersey) wants a full criminal probe into Trump's subversion of the USPS.

NYT: Robert Trump, Donald Trump's 71-year-old (younger) brother, has died in an NYC hospital. He reportedly had cancer, but no cause was given. Trump visited him Friday, then golfed as his “best friend” slipped away Saturday. By the way, his golfing date was all he had on his schedule for Saturday, the day he had said he'd be too busy to throw out the first ball for the Yankees.

FORBES: Coronavirus cases have dropped 46.3% in areas in South Carolina with a mask mandate, compared to areas with none.

I think she brings with her the energy of every Black woman in the country.

Worth noting that Moseley-Braun was the first Black woman elected to the Senate, and is the only one ever to have achieved that feat outside of Harris herself.

NEWSWEEK: Is weakly apologizing for a racist op-ed by homophobic goon John Eastman that stoked birtherism against Kamala Harris, who is a U.S. citizen and fully eligible to become POTUS should the occasion arise. Publishing a piece that unequivocally states that she is eligible, the sinking site kept up its original piece, along with some excuses. To save you the click — and they capitalize birtherism, ugh — those excuses appear below:

This op-ed is being used by some as a tool to perpetuate racism and xenophobia. We apologize. The essay, by John Eastman, was intended to explore a minority legal argument about the definition of who is a “natural-born citizen” in the United States. But to many readers, the essay inevitably conveyed the ugly message that Senator Kamala Harris, a woman of color and the child of immigrants, was somehow not truly American.

The op-ed was never intended to spark or to take part in the racist lie of Birtherism, the conspiracy theory aimed at delegitimizing Barack Obama, but we should have recognized the potential, even probability, that that could happen. Readers hold us accountable for all that we publish, as they should; we hold ourselves accountable, too. We entirely failed to anticipate the ways in which the essay would be interpreted, distorted and weaponized.

As we said in our earlier note, this essay was an attempt to examine a legal argument about the difference between “natural born” and “naturalized,” the latter being ineligible to hold the office of president. In the days since the op-ed was published, we saw that it was being shared in forums and social networks notorious for disinformation, conspiracy theories and racist hatred. All of us at Newsweek are horrified that this op-ed gave rise to a wave of vile Birtherism directed at Senator Harris. Many readers have demanded that we retract the essay, but we believe in being transparent and are therefore allowing it to remain online, with this note attached.

The home in 2014 (Image via Los Angeles Magazine)

GR8ERDAYS: The house used in the credits of The Golden Girls was just sold — for a million bucks over its asking price of $2.99M. So, a cool $4M! Sadly, I've heard the owners don't give a fuck about the series, and just liked the house, so I guess that means they could easily dismantle its iconic look.