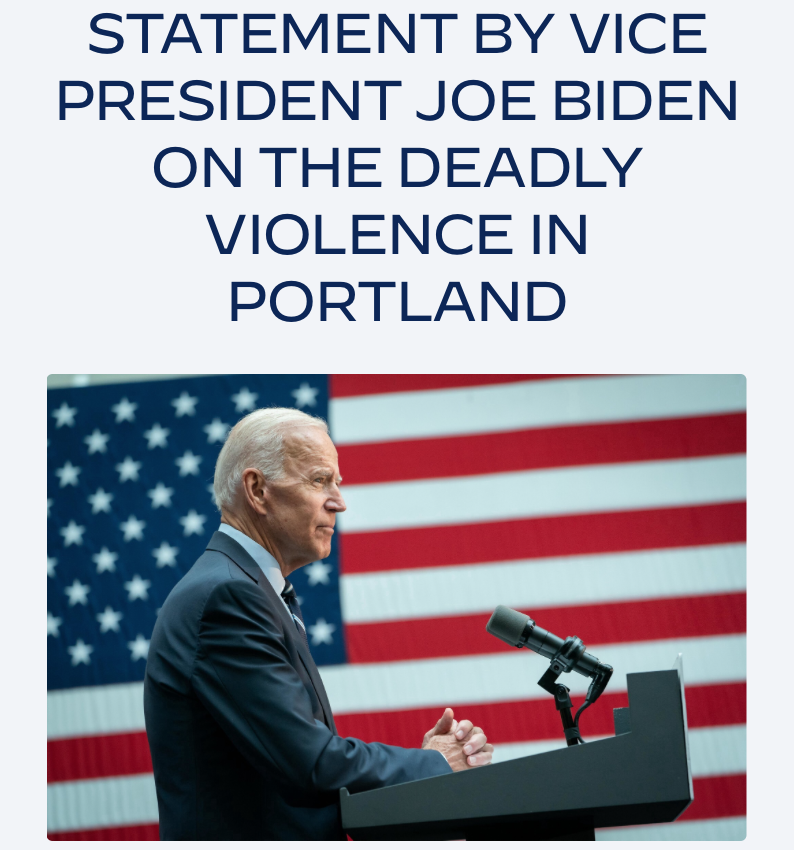 Sunday, Joe Biden issued a lengthy statement on the escalating violence in Kenosha and other spots, which Trump has relentlessly tried to call #BidenRiots — overlooking who has been in charge the past several years. In it, he condemned violence, challenging Trump to do the same. He will be making an appearance in Pennsylvania on Monday to ask Americans how safe they feel in Trump's America.

Keep reading for his full statement:

The deadly violence we saw overnight in Portland is unacceptable. Shooting in the streets of a great American city is unacceptable. I condemn this violence unequivocally. I condemn violence of every kind by any one, whether on the left or the right. And I challenge Donald Trump to do the same. It does not matter if you find the political views of your opponents abhorrent, any loss of life is a tragedy. Today there is another family grieving in America, and Jill and I offer our deepest condolences.

We must not become a country at war with ourselves. A country that accepts the killing of fellow Americans who do not agree with you. A country that vows vengeance toward one another. But that is the America that President Trump wants us to be, the America he believes we are.

As a country, we must condemn the incitement of hate and resentment that led to this deadly clash. It is not a peaceful protest when you go out spoiling for a fight. What does President Trump think will happen when he continues to insist on fanning the flames of hate and division in our society and using the politics of fear to whip up his supporters? He is recklessly encouraging violence. He may believe tweeting about law and order makes him strong – but his failure to call on his supporters to stop seeking conflict shows just how weak he is. He may think that war in our streets is good for his reelection chances, but that is not presidential leadership–or even basic human compassion.

The job of a President is to lower the temperature. To bring people who disagree with one another together. To make life better for all Americans, not just those who agree with us, support us, or vote for us.

Donald Trump has been president for almost four years. The temperature in the country is higher, tensions run stronger, divisions run deeper. And all of us are less safe because Donald Trump can’t do the job of the American president.