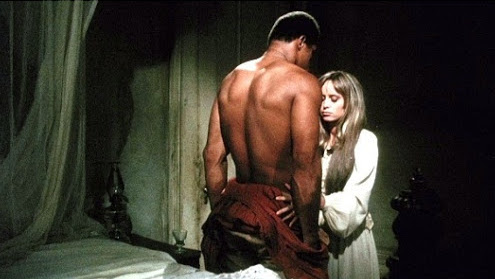 Roger Ebert called it “racist trash,” and he was being kind! (Image via Paramount)

Today marks the 77th anniversary of the birth of welterweight boxing star Ken Norton, who died at 70 in 2013.

If you haven't seen him in Mandingo — yeahhh, you probably shouldn't. But let's celebrate the beauty that he had while he had it ...

More on Mandingo, which was first a best-selling novel:

One of the film's producers, Ralph Serpe (1911-1992) said this incredible collection of words about Mandingo while they were filming it:

We're faithful to the story of the book but not the spirit. I mean, the book's hackwork, isn't it? It's almost repulsive. A lot of people have read it, but they read it for the wrong reasons. It's really a story of love. We had the script rewritten three times. ... I hated that ending in the book where the guy boils the slave down and pours the soup over his wife's grave. I mean, we have the slave boiled but we cut out the part where he pours the soup on his grave. He just ... pulls away. And we know that tomorrow there's going to be a lot of trouble. It's really a very beautiful ending.