THIS IS WHAT LOSING LOOKS LIKE: LGBTrump Founder Struggles To Erase BLM With White Paint Comments (0) 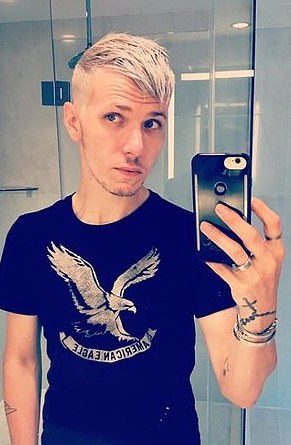 The look: “I'm a white supremacist, but I take it up the ass, too!” (Image via Facebook) 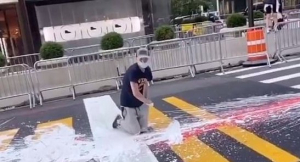 in front of Trump Tower was again vandalized, this time by Mark-David Hutt (wow, his parents hadn't read the news about Lennon, I guess), a Rochester, New York, resident who is the self-proclaimed founder of LGBTrump — a queer group in favor of the fascist-in-chief.

Hutt, 31, was seen on video pathetically squirming around trying to erase the importance of Black lives with white paint. The symbolism was not lost on us, queen.

Hutt is the latest vandal (spoiler alert: he's ever-so-opposed to vandalism in general, pinning it on BLM protesters) to try to besmirch the legend.

I found it curious watching (staged) video of Hutt vandalizing the words that the cops — it took four of them to restrain the teensy twink — were so lackadaisical and respectful of him. Would they behave this way if they saw a Black guy, same age, height, build, spray-painting BLM on, say, the side of Macy's?

I agree with the following message:

I’m not surprised or mad anymore. This is what losing looks like, on your hands and knees in the middle of the street, pushing paint around. Pathetic! pic.twitter.com/ShvwKkDt4K

We should've learned it when Michael Lucas was born: NOT ALL GAY PEOPLE ARE SMART, COOL, RIGHT OR GOOD.