OUT: A popular gay couple living in Malta were shot to death in their own home last week. Christian Pandolfino and Ivor Maciejowski were murdered August 18 in Sliema, Malta, and there is CCTV footage showing three people entering the residence fully armed and leaving minutes later. There is nothing but speculation so far as to motive, whether a hate crime or possibly a robbery — the couple had an extensive and valuable art collection, and were not shy about posting images of it on social media. RIP.

TV LINE: The RNC ratings for Night 4 were ... down from Night 3. It's unprecedented for viewers to sink on the night the actual nominee speaks. Also, Biden's big night was more watched than Trump's big night.

HUFF POST: Mary Trump's take on the RNC is cogent and insightful. I love how she calls out Ivanka's vibe of co-presidenting, and also:

If the country is a place of division and decadence as he describes it, then I would think that is down to him, as he is currently in the Oval Office.

"If the country is a place of division and decadence as he describes it, then I would think that is down to him, as he is currently in the Oval Office." pic.twitter.com/M3SFUSeCd5

On the 65th anniversary of the murder of Emmett Till, 14, Rand Paul is whining about being yelled at by protesters, calling it an "attack." Meanwhile, he ALONE blocked consideration of the Emmett Till Anti-Lynching Act in the Senate ... and Till's lying accuser is alive & free. pic.twitter.com/1XFkQrmnrq

TPM: Sen. Rand Paul of Kentucky is characterizing being confronted by activists outside the White House last night as an attack, and is claiming the people who did it are paid anarchists. Hm. Seems like democracy to me — you're an unpopular A-hole, so the people rise up and call you out for it. Nobody's getting attacked. P.S. Today is the 65th anniversary of the murder of Emmet Till, which galvanized so much of the Civil Rights Movement. The House overwhelmingly passed an anti-lynching bill in his honor, but it was stopped dead in its tracks before being voted on in the Senate by ... Rand Paul. Nice guy. Breonna Taylor — say her name. Emmett Till — say his. P.P.S. Carolyn Bryant, the white woman who accused Till of whistling at her or grabbing her, which caused his murder, confessed in 2017 that he had done ... nothing. 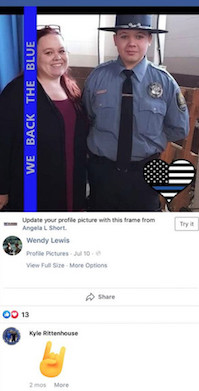 BUZZFEED NEWS: Facebook's employees are pushing back on bossman Zuckerberg in the wake of QAnon and Kenosha militia stories. A militia group reportedly used a Facebook page to incite the violence that occurred in Kenosha — and Facebook declined to censor the page until people were killed. Pictured above: Accused Kenosha killer Kyle Rittenhouse with his equally maniacally Blue Lives Matter (More Than Yours) mom.

JOE.MY.GOD.: Four attendees of the North Carolina portion of the RNC have tested positive for COVID-19. Yes, we Cain!

CNN: Republican operative Juleanna Glover to her colleagues who worked with Trump: If you saw something, say something — before the election.

TIME: Trump's threat to send law enforcement to the polls is hollow.

TWITTER: Comedian Jim Gaffigan snapped and poured searing truth on his Twitter followers, some of whom were shocked he would dare to voice political views.

I dont give a fuck if anyone thinks this is virtue signaling or whatever. We need to wake up. We need to call trump the con man and thief that he is.

Hosted by Peaches Christ and Marga Gomez, Reunion: Making History will be an evening of powerful performances, inspiring presentations and a heartfelt celebration of LGBTQ History Makers. Register today for access to the live broadcast on October 16th, as well as sneak peeks of early content along the way!

VARIETY: J.K. Rowling continues to be an asshole, returns award over her trans-dismissive views.