ABOVE: Rich people are never far from a beach in a pandemic.

BELOW: Keep reading for a gay Olympian, a sad #MeToo revelation, Trump's teeny-tiny shot at winning in 3.5 days and more ...

We'll take him! (GIF via GIPHY)

TOWLEROAD: Olympic hottie Danell Leyva goes into detail about his decision to come out as gay. 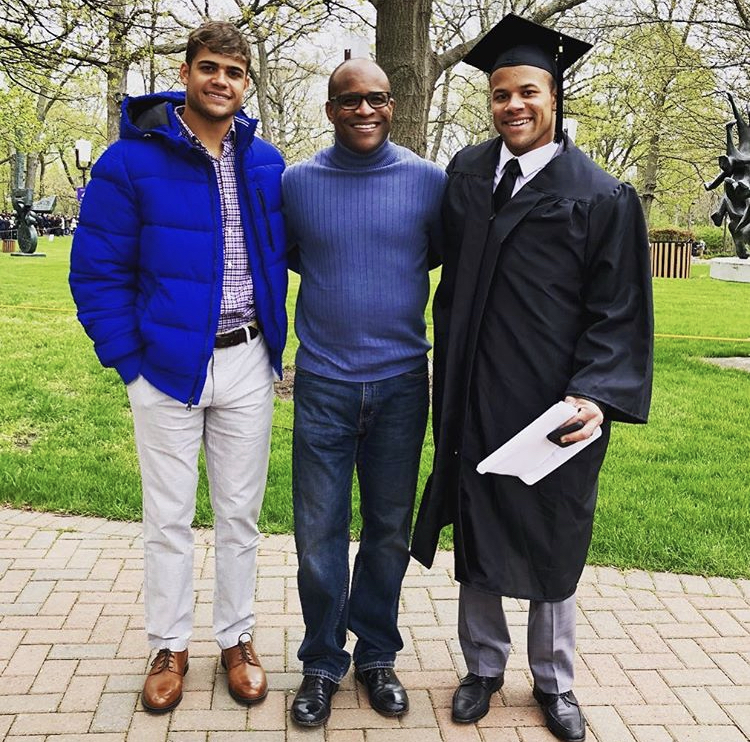 Jake (L) with his father and brother (Image via social media)

KENNETH IN THE (212): Jake Bain, the college football player who came out and wound up on The Ellen DeGeneres Show (but later quit sports), has alleged serial sexual abuse by his own dad, Eric Bain.

Jake posted allegations that Bain has abused him and his plays via inappropriate showers and sleepovers; the elder Bain has yet to react. Jake, who now IDs as pansexual, was so sweet and inspiration on Ellen:

THE SIGNORILE REPORT: Biden promises to pass the Equality Act within 100 days of being elected.

POLITICO: In order to win, Trump's status in polls has to be way off, much more than it was off in 2016. Trump knows it; he just canceled his victory-party plans, and will instead likely hole up in the White House.

HUFF POST: More have already voted in Texas in '20 than voted in '16. Tsunami of new voters and infrequent voters.

JOE.MY.GOD.: New York's Letitia James, the AG who will likely bring criminal charges against the Trump crime family, is also readying a long list of rules and orders that Biden should immediately work on flipping once he (hopefully) takes over in order to un-do the damage this monster has done to our republic.

BLOOMBERG: Walmart has pulled guns and ammo off the shelves in advance of Election Day, just in case ... y'know. (Yay???)

DAILY KOS: That Swiss security expert peddling damaging (Hunter!) Biden claims turns out to be an A.I.-generated fake — he does not exist. Once again, Russia has used Bannon, Giuliani and just about everyone else on the right to spew made-up documents in an effort to skew the U.S. election. The masterminds of this belong in prison: 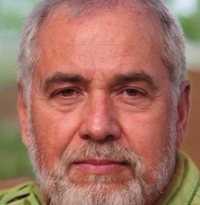 problem of Aspen’s photo [inset]. Because it’s not a photo. It’s an image created using an AI program that generates fake faces based on algorithms. And speaking of fake, no one seems to have noticed that this Swiss superspy’s name is actually just a version of the name of the British automaker Aston Martin.

The fake folio from the fake analyst has not only been the basis of a far-right AM radio and social media blast, it’s been distributed by people associated with the Trump campaign. The document, known as the “Typhoon Investigations” report, first appeared on a website from economic adviser Albert Marko. The real author appears to be a blogger and economics professor named Christopher Balding. And it turns out there is an actual Chinese connection in all this … because Balding actually lives in Beijing.

RAW STORY: Janice McGeachin is Idaho's lieutenant governor — and she drove around in her truck with a gun and a Bible to protest coronavirus precautions.

NBC NEWS: All eyes on Florida's Sumter County on Election Day evening because votes will begin pouring in quickly (7:15 p.m. ET) and if Trump isn't winning by 2-1, he could be in serious trouble in that dreadful state.

TWITTER: This is absolutely insane. Kanye West had a hologram of his wife's late father, Robert Kardashian, created for her 40th birthday, making him talk about how awesome she is (and praising her choice of the “most, most, most, most, most genius man in the whole world” for her husband):

For my birthday, Kanye got me the most thoughtful gift of a lifetime. A special surprise from heaven. A hologram of my dad. ✨🤍 It is so lifelike! We watched it over and over, filled with emotion. pic.twitter.com/jD6pHo17KC

WAPO: I had a reader complaining to me that I am unfair to Glenn Greenwald, who in my opinion is a Russian asset at worst and a terribly anti-Democratic agent of chaos at best. Now, Greenwald has resigned from his own moneyed job at The Intercept, all because he thinks the site has become in the tank for Biden! The Intercept! His former team's statement says it all: 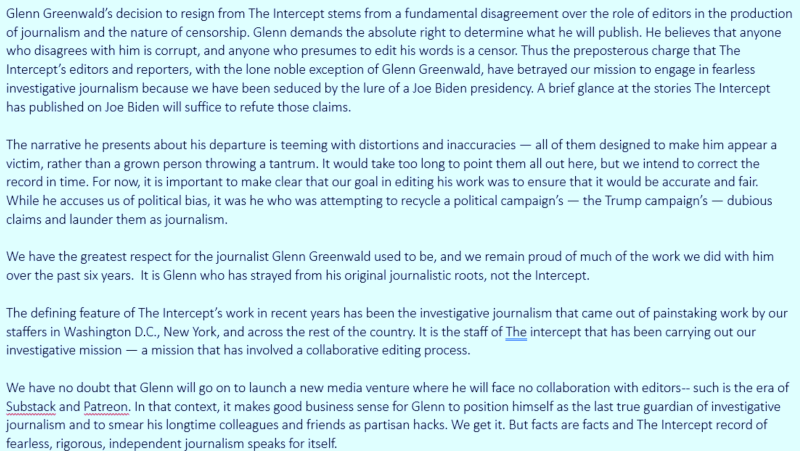 “The journalist Glenn Greenwald used to be” (Image via The Intercept)