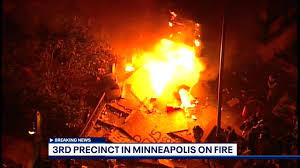 According to the complaint, Hunter sent multiple private messages on Facebook bragging of his actions in Minneapolis on the night of 28 May and morning of 29 May, writing, “I set fire to that precinct with the Black community,” and, “My mom would call the FBI if she knew.”

Video shot that night shows a person later identified as Hunter firing 13 rounds from a semiautomatic assault-style rifle on the 3rd precinct police station while people believed to be looters were inside. He then high-fived another person and shouted, “Justice for Floyd!” according to the complaint.

Later, he privately messaged Steven Carrillo, another alleged “Boogaloo Boi” in California, urging him to “go for police buildings”, according to the federal criminal complaint.

Carrillo, by the way, allegedly drove to Oakland, California, and shot two cops guarding a federal courthouse — killing one. This crime, too, was meant to look like Black-on-cop crime.

And people want to blame anyone in the Black community for being open-minded about conspiracy theories involving white people?