ABOVE: Tell us something Jaime Harrison doesn't know! 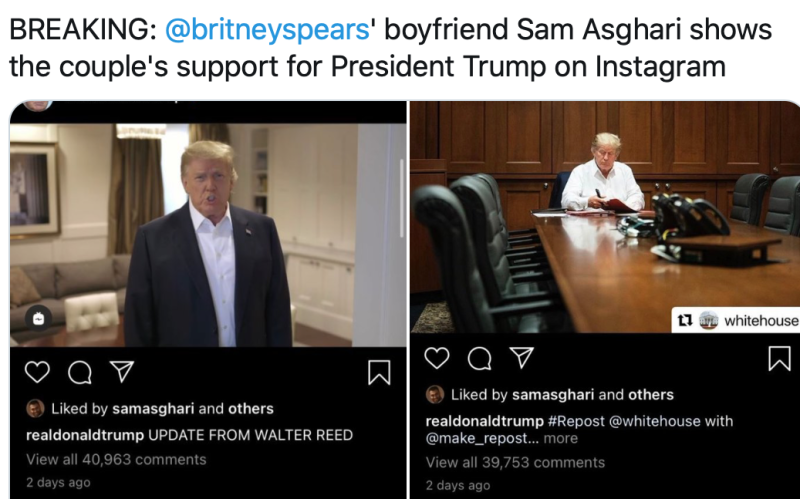 TWITTER: Sure seems like Britney's man, Sam Ashhari, supports Trump. He likes Trump's posts and when questioned, makes it into a joke: 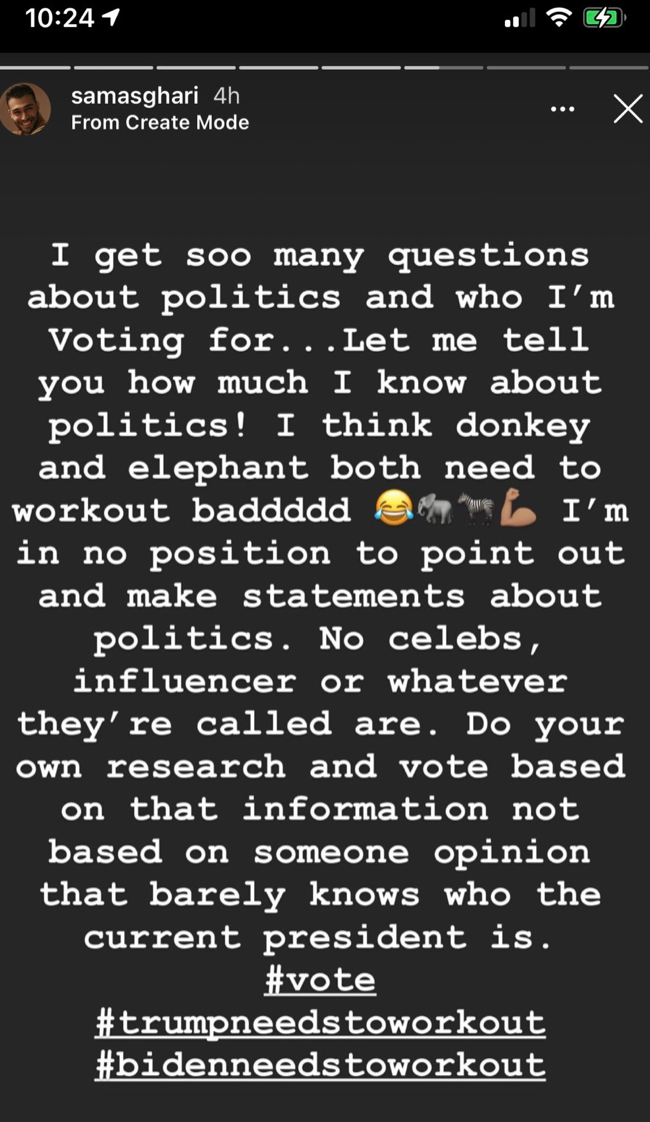 CNN: The second presidential debate has been canceled in the wake of Trump refusing to do it virtually.

POST & COURIER: Sen. Lindsey Graham has refused to take a COVID-19 test ahead of tonight's scheduled debate against his rising-star challenger Jaime Harrison — so the debate's off, replaced with separate interviews. It is widely believed that Graham had to conceal a (potential? actual?) COVID-19 positive result because that would delay the confirmation hearings of Amy Coney Barrett. That's how craven these folks are. #LindseyGrahamHasCovid trended #1 on Twitter in the wake of this development.

CBS NEWS: Continuing to try to exploit racial divisions in the country, an ailing Trump will make his first public appearance since, er, beating COVID-19 from a White House balcony Saturday, addressing Candace Owens and her buffoon Blexit group. The last White House event was a super spreader event, so let's hope for more of the same.

Here’s Mike Pompeo on Fox News saying he has Hillary Clinton’s emails (unclear which ones) and plans to publicly release them before the election. pic.twitter.com/TQjfksQd3u

TWITTER: Secretary of State (it's insane that this is his title) Mike Pompeo is rushing to release more of Hillary Clinton's emails ahead of the election. How this has anything to do with the role of a Secretary of State is anyone's guess. WAPO: Michigan's Gov. Gretchen Whitmer holds Trump partly responsible for the rhetoric that almost got her killed in a home-grown terrorist plot. And no wonder, he trashed her on the very day she spoke out about the conspiracy to KIDNAP AND KILL HER.

Still beats Sheriff Dar Leaf of Barry County, Michigan, who shared a stage with one of the alleged conspirators. He actually downplayed the severity of the situation (“just a charge”) and suggested perhaps the armed lunatics merely wanted to perform a citizen's arrest on Whitmer.

THE HILL: Bob Dole, out there making a great case for death by natural causes.

NYT: Trump suddenly came into $21M in cash in 2016, when he desperately needed it. Nobody knows where it came from, just that it came through a Las Vegas holding of his:

Experts in tax and campaign-finance law consulted by The Times said that while more information was needed to assess the legitimacy of the payments, they could be legally problematic.

EXTRATV: Horrendous Doc Antle of Tiger King infamy has been socked with animal-abuse and other charges.

INSTAGRAM (FOLLOWS APPRECIATED): Can you believe John Lennon would have turned 80 today? And that he's been gone just under 40 years? (I can't.)