In an early-morning tweet Friday, Trump and Melania both confirmed they have contracted COVID-19.

(Yes, I am aware he is a pathological liar who would love to avoid the next two debates and a landslide loss, but no, I do not believe it's a lie.)

The announcement comes hot on the heels of a positive test — and some symptoms — from Hope Hicks, Trump's closest aide yet to have gotten the potentially deadly virus.

Hicks had flown with Trump on Air Force One to the first presidential debate Tuesday, and to an ill-advised, mostly maskless Minnesota rally on Wednesday. After the latter event, Hicks exhibited mild symptoms and was quarantined on the plane, leaving via a back exit.

Though he knew Hicks had COVID-19 and that he had been in close proximity to her, Trump still traveled — maskless — to New Jersey on Thursday to collect money at a fundraiser at his Bedminster golf club. Up until his own positive result was reported, he had planned on flying to Florida Friday for more campaign events.

How this development will affect the presidential race is unclear. A low number of voters were still undecided in polls just over 30 days out, and with voting well underway in many states.

I realize some Democrats will be (you should pardon the expression) feverishly trying to game this out, but there are some fundamentals that do not change, regardless of whether the Trumps ever become symptomatic, seriously ill or die:

(1) From the beginning, Trump has downplayed not only the seriousness of COVID-19, but its very existence. Privately, he is on tape acknowledging it is far deadlier than his public remarks suggest.

(2) Trump has consistently been in situations and held events at which masks and social distancing were lax, if not nonexistent.

(3) As recently as Tuesday's debate — when he was sharing a stage with another 70something, Democratic candidate Joe Biden — Trump mocked the wearing of masks.

(4) And again, it is established fact that he traveled to New Jersey, maskless, when he knew he had at the very least been exposed to the virus.

I believe these factors make him getting the virus less likely to result in sympathy than indifference or derision.

The takeaway is not that the poor guy became sick in spite of all best efforts being taken; the takeaway is that a science-denying narcissist finally contracted a virus he has for seven months dared to infect him.

Trump, in spite of being older and obese, is still likely to recover. He is also, then, highly likely to show that his own experience with the virus proves it is no big deal. This might feel like bragging rights, but it hardly mitigates his overall response.

One wilder scenario — and there are many — includes him becoming ill and having to hand power over to Mike Pence. But I think we need to see if Trump ever becomes seriously ill.

In the meantime, we must hope that Joe Biden and Nancy Pelosi remain healthy. 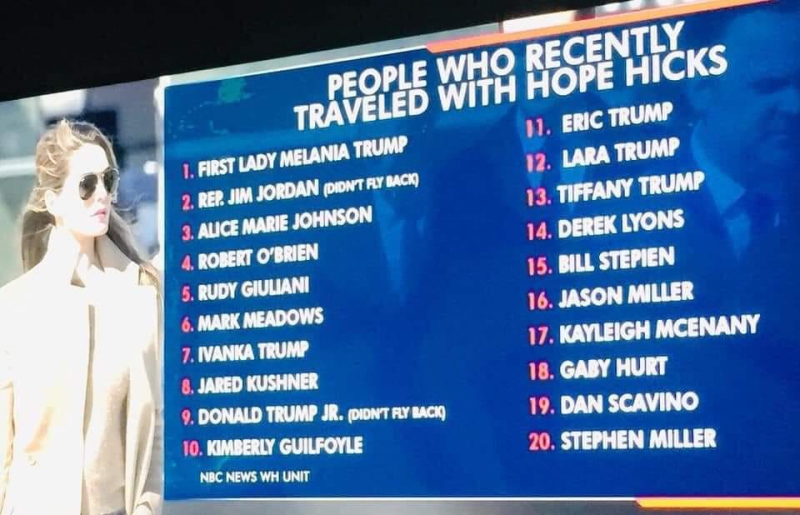 Others possibly exposed (Image via NBC)

As I have repeatedly written and said, the Democrats are in an enviable position heading into the final month, but that 2020 has shown anything can happen in 30 days — and now it has.

We just have to stay the course and VOTE, VOTE, VOTE.