WSJ: Parler is run by the Cambridge Analytica people. This ... won't end well.

INSTAGRAM: Good for Melissa McCarthy — she was attached to a charitable effort that embraced an anti-LGBTQ group and is emotionally apologizing:

EXTRATV: Rick Moranis's alleged assailant was spotted on the NYC subway system and arrested, blocks from where he is thought to have cold-cocked the beloved actor.

GR8ERDAYS: The upcoming reunion of The Fresh Prince of Bel-Air is teased in a new trailer. 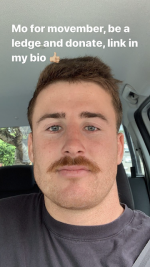 JOE.MY.GOD.: Something like 15,000 people showed up in D.C. to protest (checks notes) the free and fair election that ended with displeasing (Trump lost bigly) results. They're claiming it was more than a million. The event's various hashtags were, by the way, hijacked.

POLITICO: Apparently, that ridiculous presser Giuliani held at the Four Seasons (Total Landscaping) put the kibosh on some elaborate legal planning the Trump campaign had laid in order to muddy the election.

ONLYFANS: I just posted the kind of close-up on someone's dad we all wish we could have on a daily basis. (And my account is just $9.99 a month.)

INSTAGRAM (FOLLOW HERE): Pretty psyched my Gr8erDays IG has attracted 1,000 new follows within the past 24 hours — a 20% growth! Thanks to Queerty — it seems to have been Marlon Brando's hamhocks. Latest add — a fun snippet introducing you to the late, great Dona Drake: