ABOVE: Tomorrow, JFK Jr. would have been turning 60. In the video, he gives his body only faint praise. (Images via Tom Daley)

GREG IN HOLLYWOOD: Tom Daley shares his workout progress while in lockdown. It's ... going well.

NYT: RIP to David Dinkins, NYC's first — and only — Black mayor, who served from 1990 through 1993. He was mayor when I arrived here, and I was bummed that Giuliani defeated him. We, uh, can all see how that turned out. Dinkins died less than two months after the death of his wife, Joyce.

Key portion of his NYT obit:

... in a gesture of conciliation, he invited Mr. Giuliani to dine with him. “As much as we disagree,” he said, “I extend to him my hand in brotherhood.” Mr. Giuliani refused.

Mr. Dinkins, in his memoir, denounced Mr. Giuliani as “a cold, unkind person” who practiced “the politics of boundless ambition without the guidance of a set of core beliefs or the humility and restraint of experience.”

He recalled that the comedian Jackie Mason, who supported Mr. Giuliani in the 1993 election, called Mr. Dinkins a “fancy schvartze,” using a derogatory Yiddish term for Black people. He was “essentially calling me a nigger,” Mr. Dinkins wrote. He said that Mr. Giuliani’s underlying campaign message was: “The city is in terrible financial straits. Do you really want a Black man presiding over it in this time of trouble?” 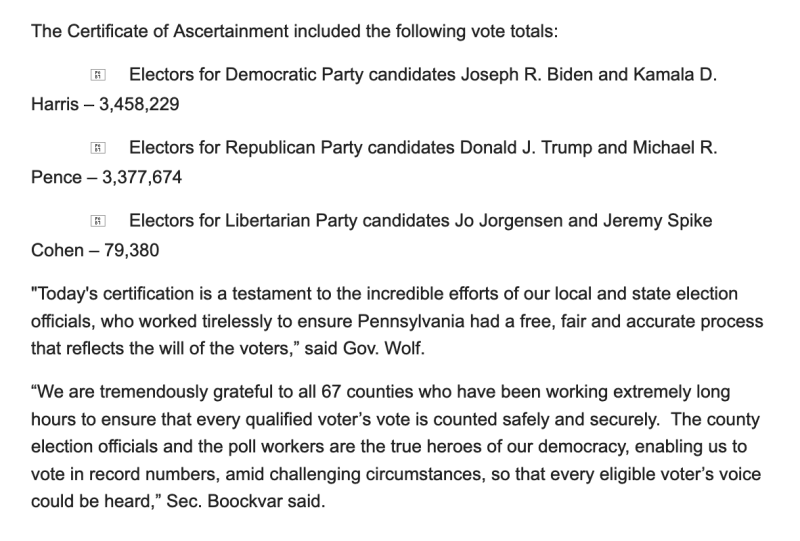 It's been over. But it's over. (Image via Twitter)

THE HILL: Pennsylvania has certified Biden's win. He wound up winning by more than 80,000 votes.

It’s the... In-N-Out Burger socks for me. pic.twitter.com/br4G77IHle